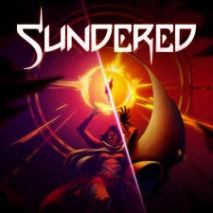 After I tried out Jotun on Sir Merriweather‘s recommendation, I knew I had to get this game too. Sundered, the latest entry from Thunder Lotus Games, promised to be a fast-paced, extra-challenging Metroidvania with some amazing looking hand drawn animation and environments, all set in a bizarre world that seems to be the product of dumping sci-fi, fantasy, and Lovecraftian horror into a blender, and I think it delivered quite well on that promise.

What really sets Sundered apart from other Metroidvanias, I mean aside from the amazing visual design, is the difficulty. Combat is pretty difficult early on, there are a good deal of nasty traps and hazards lying around, and health potions are extremely limited. You can only survive by gathering enough shards to increase your stats and become tough enough to survive the increasingly difficult enemies in your way. It may sound a little bit like a Dark Souls type of game, and sometimes it does kind of feel that way, but it differs from that formula in a few significant ways.

There’s good news and bad news about the shards (not souls!). The good news is that you never drop or lose the ones you’ve collected in any way. You always keep everything you earned, so dying doesn’t feel quite as painful as a Souls game. The bad news is that there are no checkpoints, save rooms, bonfires, etc, of any kind. Each time you die you’re sent back to the starting room, which is also where you can spend your shards, and you’ll have to run all the way back to where you were, with the only help being any shortcuts you may have unlocked along the way. Oh, and did I mention that the environments partially randomize every time you die, so that a good chunk of the rooms you visit are never the same? Well, now you know.

The combat is very different from your standard Metroidvania or Souls game too. There’s no time for taking it slow and cautious here. Enemies come at you at completely random times and in massive, aggressive waves, leaving you no time to think. You’ll need to act quickly, staying in constant motion to avoid the many incoming attacks and to make your way towards the higher priority targets, which are usually some kind of deadly long range types like laser snipers or wizards. I won’t lie to you, it is extremely difficult at first, especially when you get to the first major boss, who absolutely is going to slaughter you many times. You’re going to die a lot for a while and it will probably become a bit frustrating.

However, if you can make it through the first 1/3 of the game, you will have pretty much climbed to the top of the learning curve and once you’ve finally gotten into the rhythm of things and begun to pick up some of the more advanced abilities, you finally start feeling more powerful and confident, and you will likely find it all becoming easier and easier from there on. Don’t get me wrong though, you’re still going to have to work for that win, with all the furious finger power you can muster.

Another feature worth mentioning is the ability upgrade system. Throughout your journey you’ll find these elder shards which you can either bring to an ability shrine to corrupt an active ability, which gives you a fancy upgraded ability, or you can bring them to the furnace and destroy them, which will give you a large reward of regular shards and unlock a small new branch on your skill tree that contains some extra stat increases and a single new passive ability that can be unlocked.

Not only does this offer some interesting options in terms of character ability and playstyle, but this choice will also end up changing not only your ending, but which of three final bosses you’ll face too (one for going all corrupt, one for going all resist, and one for a mix of the two). This is a pretty good incentive to replay it again someday and in new and different ways as well.

Now, there are some performance issues going on here, though there has already a patch that seemed to help with them a bit. The game has pretty long load times and you may experience the occasional stutter or even a few crashes. This is unfortunate, but ultimately it doesn’t change the fact that this is an extremely fun and well-produced game.

The only thing that would potentially stop anyone from enjoying this game is that nasty difficulty level. This is something that’s going to turn a lot of people off and probably prevent it from being any kind of mainstream blockbuster, but…if you’re someone that’s up for a challenge, this is absolutely one worth seeking out and conquering.