It’s with a mixture of pride and shame that I take my turn and present the third installment of our Show us your game collection series. Pride because looking at these pictures reminds me of all the good times I’ve had playing these games and of the effort that went into tracking down some of the rarer items at reasonable prices. Shame because my hoarder tendencies get the best of me more often than not (because of course I might need all these game I hated so that I can play them twenty years from now). In many ways I envy people like Lucius who can bring themselves to sell their games as they complete them, rather than see them continue to pile up until they overflow out of every available piece of storage, or people who are collectors but can at least organize their hoard neatly like Baron Richenbaum. Be that as it may, rather than tidy up before I presented this tour I thought it would be better to be brutally honest and show my collection in its natural state so that you could have the full experience. (Just be glad you don’t have to live with me!)

To begin, I should start with where most of my console gaming happens, which is in front of a TV in the basement. 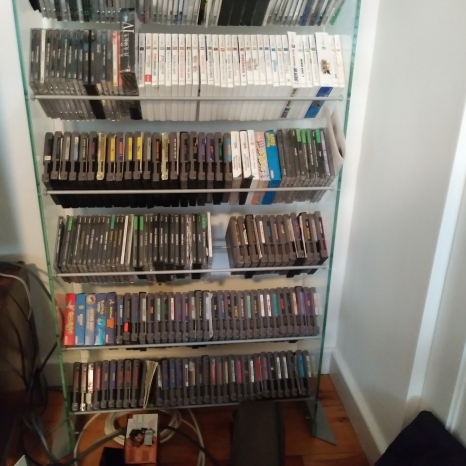 In front of the TV is a mess of dusty old consoles and wires, but the ones I pretty much always have hooked up are my Wii and PS2. I often have my GameCube and SNES hooked up as well, but rarely play my PS3, 360, and Xbox. Also visible in this picture are a NES, Sega Genesis, Sega Saturn, a UK Wii (an indulgence, to be honest), and one of my latest acquisitions, some Skylanders figurines (yes, I know I’m late to the party, but I wanted to see what all the hype was about). Oh, and an old VCR, haha. I also have a Dreamcast lying around somewhere, and a Virtual Boy (and a R.O.B. robot haha). My Wii U is hooked up to my upstairs TV. That’s more just for a change of scenery for me rather than any need for a better or bigger TV. Once I get a Switch I’ll hook that up to the upstairs TV and move the Wii U to the basement to join the others.

Next to the TV in the basement is one of several shelves where I keep a lot of games out. This shelf includes 3DS, PS1, and NES games.

Next up are several more shelves stuffed with games.

The picture on the left is of a rack that holds most of the GameCube, Wii,Wii U, and PS2 games that I’ve finished. The picture on the right is of a bookcase with, for the most part, GameCube, Wii, and N64 games I haven’t finished yet. Note the CRT TV I keep around for playing light-gun games like Duck Hunt. Not visible in this picture due to the TV being in the way is a section containing most of the DS games that I’ve finished.

Next up is an example of several stacks of games that I have strewn about. This particular picture is of Xbox, 360, PS2, and PS3 games, most of which I’ll probably never play for years. I have similar stacks of DS and 3DS and Wii U games. I don’t really have a great excuse for why I buy games that I’m not going to play right away. Part of it is that I got into a bad habit where when I bought a new console (or more often than not a used retro console) I would jump-start my collection by bidding on cheap eBay lots that included a lot of games. I also have an irrational need to buy games that have gotten great reviews or have some importance in terms of video game history when I see a cheap copy in the wild. I’m sure I’ll play them… eventually!

Next up, I have quite a few drawers full of stuff that don’t have boxes. 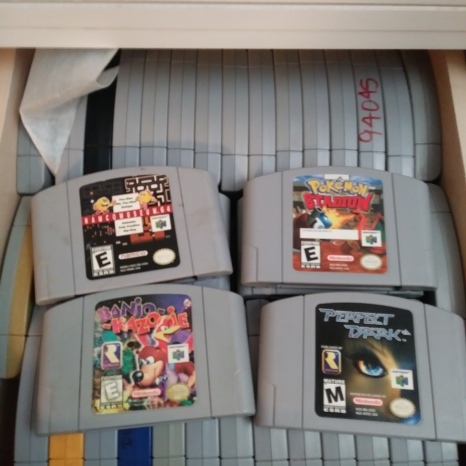 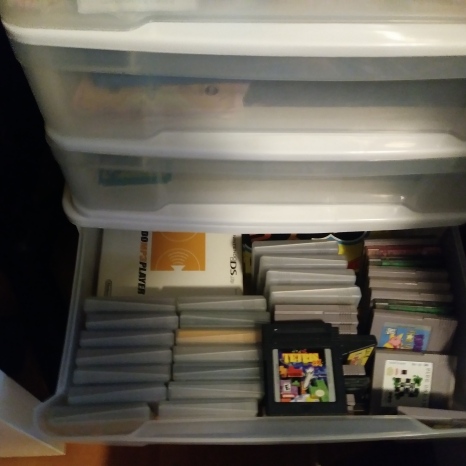 The first picture is of my drawer full of N64 games. I have another separate drawer for N64 games I’ve beaten, and two drawers for SNES games (including ones I’ve beaten). The picture on the right is of a drawer with the Game Boy, Game Boy Color, and Game Boy Advance games I’ve beaten. I like how nicely they fit into this drawer, although I’m getting close to the point of having to start on another drawer. I also have a random binder of Dreamcast games without cases that I got off of eBay and drawers full of random stuff like my various handheld systems, some New 3DS faceplates, random controllers, and Game Boy and GBA games I haven’t finished yet. I have various peripherals hidden in a closet in this same room, including Guitar Hero paraphernalia, Dance Dance Revolution game pads, a Dreamcast keyboard for playing Typing of the Dead, a maracas gamepad for playing Samba de Amigo, Donkey Konga bongos… and other crap I’m probably forgetting!

Almost at the end! Lastly, I definitely had to show off some of my collection of video game stuff that aren’t games. 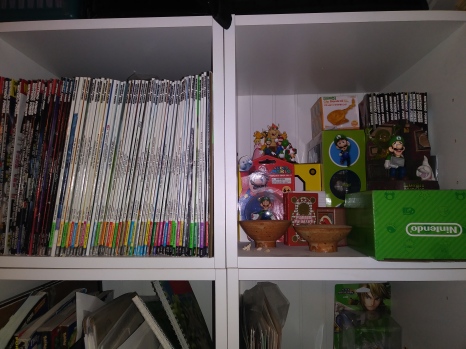 On the left is a picture of some shelves that hold my gaming magazines, including an almost complete collection of Nintendo Power issues, and quite a few Game Informer issues. The last picture is of some of my Amiibo collection. I’ve ended up buying way more Amiibo than I thought I would, so what I’ve ended up doing is keeping a few out on my desk, and the rest in the basement. Every once in a while I’ll change up which ones are currently on display, although favorites like Ike and Daisy are pretty much permanent fixtures.

Phew! At this point I’m probably feeling more shame than pride, although in my defense, I don’t really collect other stuff like movies so much, so I don’t feel too guilty. Also, I’ve definitely been buying less games this past year and have gotten a bit better at resisting buying games I know I won’t play for a long time. I have a huge backlog of downloaded games as well, and I probably should stop buying games entirely… but with new must-have games being released every day I know that isn’t likely to happen anytime soon!

I hope you found this entertaining. Perhaps my post can serve as a warning to any gamer who has hoarder tendencies before they start down the slippery slope… 😉