It wouldn’t be prudent to talk about Perception, an eerie new title made by Deep End Games, without asking you how you feel about interactive experiential games – or more colloquially, ‘walking simulators’. I’m not about to argue with anybody on the merits of whether these are games or not; rather, I ask because the amount of interest and investment you have with the genre will determine whether you’re willing to stick with Perception.

The game follows a gal named Cassie, who travels to Gloucester, Massachusetts, to a home that has been creeping into her dreams. As soon as Perception starts, it tests your wherewithal, because there is no lead up as to how Cassie found this house, what her personality is (beyond being blind and picked on), who she’s talking to on the phone as she walks up to said manse and, more importantly, why you should care. When it comes to stories, there’s a certain amount of suspension of disbelief a person can carry before they get bogged down in the logistics of it all. For Perception, my suspension quota was apparently very small, as I immediately lost interest in the hows and whys. I simply shrugged my shoulders and soldiered on to see what the game offers mechanically. 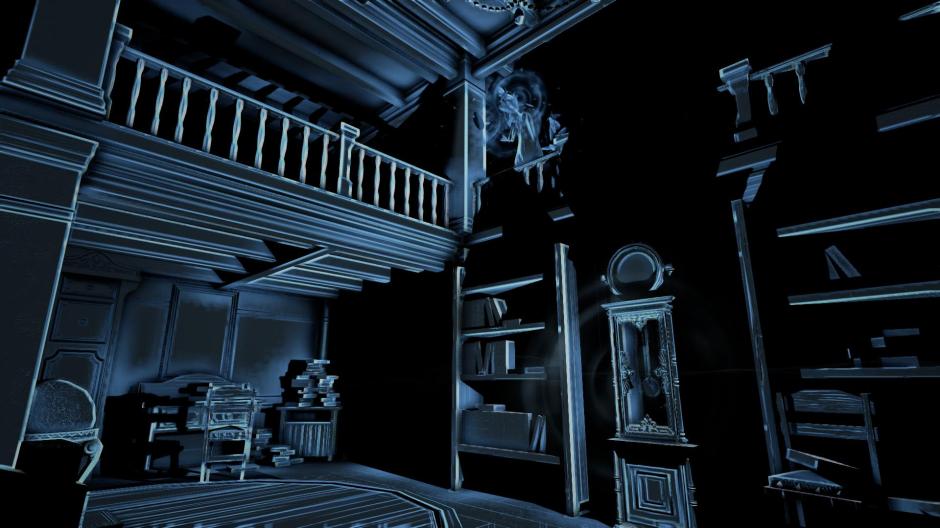 As I mentioned, our hero Cassie is blind. This is conveyed by her, uh, inability to see. To give the game something of a visual panache, Perception provides her with a sonar-like ability that visually conveys the things she hears. It’s a neat trick, giving the game a unique visual style that is simple but gives you the sense of barely knowing your surroundings. Cassie can stamp her walking cane on the ground, which sends out a wave of sound that often fills an entire room with the details you’ve been missing. However, to give the game a sense of tension, an ephemeral being will give chase should you overdo it with the stick whacking. Being caught means falling back to a previous checkpoint – but finding a hiding spot requires you to use your cane. While certainly scary, this mechanic grew to be more irritating than anything else.

This wouldn’t be an issue if the story was worth following, but alas it’s not to be. Again, I had no affinity for Cassie or her plight, and as I meandered around Echo Bluff and unfurled the mysteries surrounding it, I found it all to be a bit too rote for my liking. Plot details are conveyed by Cassie blurting out narrative, through diary pages (which are neatly and smartly read by a phone app) or by very trite recordings that seemingly litter the house. Because the pacing is so brisk, you’re often floating to different bits of plot at a pretty good clip. Again, because I didn’t have a horse in the race, I noticed how often I was being fed the next story beat rather than parsing what was being told to me.

There’s definitely a need for atmospheric, narrative-driven games on the Switch. Putting on a pair of headphones can totally immerse a player in the right circumstances. Perception is a very positive step in the right direction, even if it misses the mark. It also makes an admirable attempt to be an ‘every’ game by allowing you to raise or lower Cassie’s chatter and to switch the game’s focus between either diving into the plot or amping up the horror.

Because I’m new to narrative horror games, I wondered whether I just don’t fully understand how to play Perception; maybe those with a keen interest in horror or more story-heavy games can overlook the idiosyncrasies I had trouble getting past. The game certainly carries a lot of potential in its presentation, but it doesn’t quite execute its story in a manner that drew me in. I have faith that Deep End Games will nail it with their sophomore release, but for now Perception is a missed opportunity.

Perception is available digitally on PS4, Xbox One, Switch and PC. We reviewed the Switch version.

Disclosure statement: Review code for Switch was provided by The Deep End Games. A Most Agreeable Pastime operates as an independent site, and all opinions expressed are those of the author.