The Zubmariner edition has just been released on PS4 ahead of a sequel, Sunless Skies, which is due in early 2019. It includes the Zubmariner DLC, which allows you to dive beneath the waves, and Sunless Sea follows on from Fallen London, a long-running browser game that’s been lauded for its sublime writing and world-building. The basic plot is that an alternative Victorian London has been transported a mile below the surface of the Earth, after an inadvisable deal Queen Victoria strikes with a mystical entity known as the Echo Bazaar. London is now perched at the edge of a vast underground expanse of pitch black water known as the Unterzee. 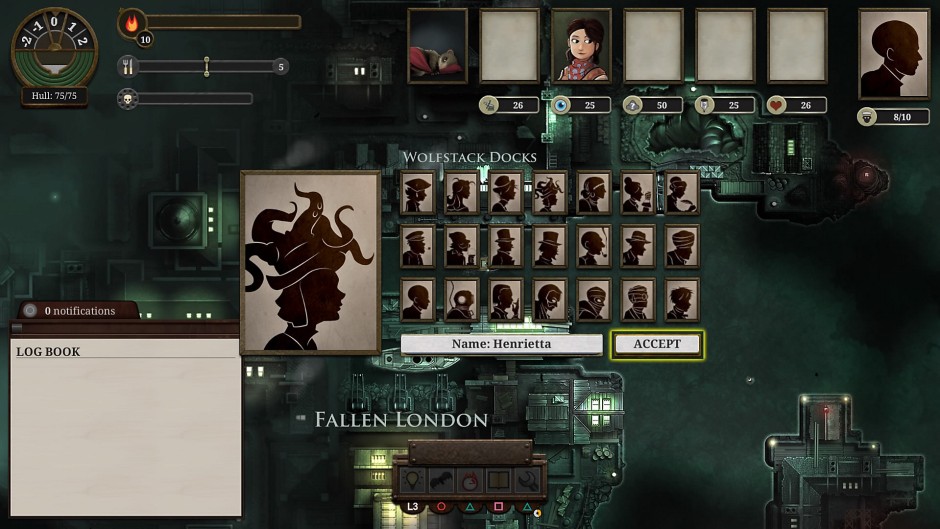 The Unterzee appears as a vast blackness at first, and as a zee captain your aim is to fill in the map and discover the weird and wonderful islands that pepper the ocean. There’s all sorts out there, from warring guinea pigs and rats to a volcano that’s directly linked with hell. What’s more, the game is totally freeform: you choose your objective at the start, whether that’s to track down the remains of your father or write a history of the people – and THINGS – of the Unterzee, among many other options.

The freeform nature of the game is both its greatest asset and its biggest problem. It’s an intimidating game for new players, with little guidance on what you should be doing and bizarre game systems that take a while to get used to. You have to grapple with strange stat counters like Veils and Mirrors, with little idea of what they actually mean. For the first few hours I simply sailed around with no clue about what I was doing. And then I died, because this game is brutal.

You need to stock up on fuel and supplies before you set sail. If you run out of fuel in the middle of the Unterzee, your only option is to sacrifice some of your crew to the gods in the hope that they deliver some fuel from above. And if you run out of supplies, your crew might start eating each other. If you run out of crew, it’s game over. And as you sail around, your terror level increases, sometimes jumping up several levels as a result of terrifying encounters on the islands you visit. If it reaches 100, you go insane. Basically, venturing out into the Unterzee is very perilous indeed.

And if your captain dies, the penalties are harsh. That character is gone, and you start out in Fallen London again as another character of your choosing, possibly a rival captain or even your dead captain’s son or daughter. You only keep a portion of your experience and some of your goods, depending on whether you made a will and bought certain upgrades. And worst of all, the map is reset, with islands moving to different places, and the whole sea once again being covered in the fog of war.

Basically, dying is a terrible, terrible inconvenience. And not very much fun. 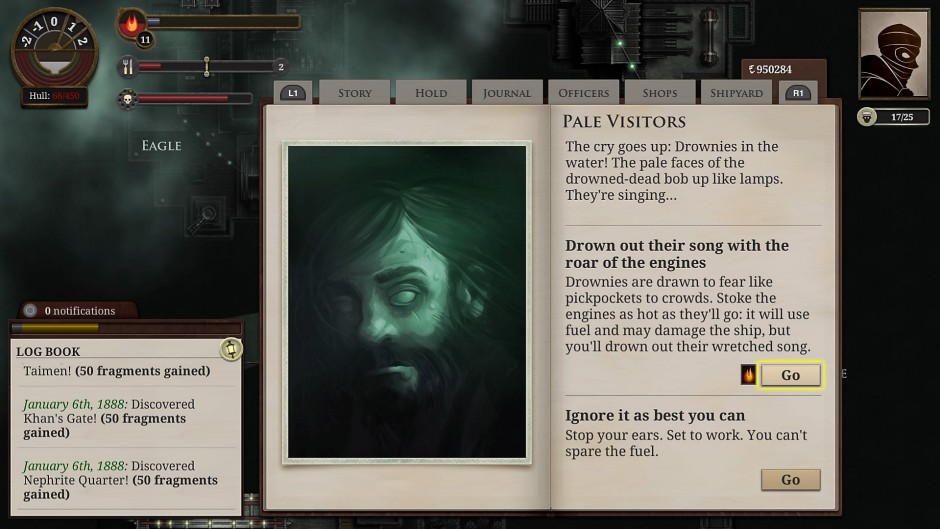 Luckily, there’s also the option to enable manual saves to avoid all this resetting nonsense. The game says that you won’t get the ‘Invictus’ achievement for finishing the game if you enable manual saves, but screw that, because if I’d stuck with the autosave ‘hardcore’ option I would have had to start all over again at least four times already instead of just reloading a previous save. I am more than happy to save spam if it means not having to play through hours and hours of game all over again.

Because that’s the thing – it takes AGES to get anywhere in Sunless Sea. Your ship is extremely slow, and it takes hours to level up your experience points and scrape together the money needed to buy ship upgrades. Having to play through all that again is madness. MADNESS I TELL YOU. These kind of autosave restarts only work well in games like Dead Cells, where at most you’ll be playing for about 45 minutes before restarting. But each experience point in Sunless Sea is hard-earned, and too painful to lose.

At first, I spent my time in Sunless Sea trying to complete as many quests as I could in an attempt to get some money and upgrades – better guns, faster engines, that kind of thing. But I found myself getting irritated with the meagre rewards – earning money is HARD. Then I had a revelation – this game isn’t about levelling up like you’d do in a normal RPG. Rather, it’s a story you unlock a piece at a time. 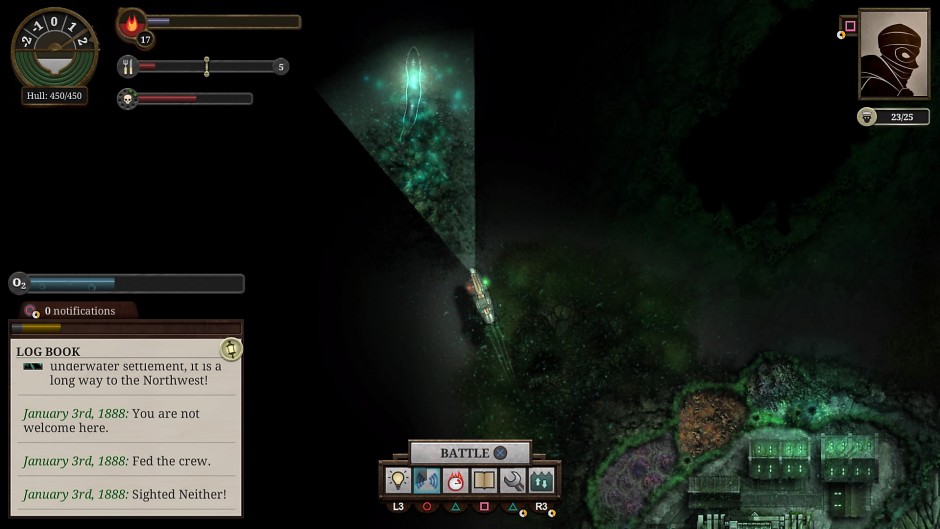 After a while, I stopped worrying about completing quests and instead just spent my time uncovering the map and enjoying the tales you uncover at each island. The story about the Pentecost apes and their search for souls. The island that attracts letters and parcels, and postal workers along with them. The Mangrove College and it’s mouldering scholars. It’s a rich and fascinating world out there in the Unterzee.

Really, the game is one massive choose-your-own-adventure storybook. Your interactions at islands involve clicking through text, sometimes making choices, and sometimes being faced with an option that comes with a percentage chance of happening based on your experience level. But the important thing is that all those pages of text are a joy to read. Occasionally the writing veers into pretentious territory, but for the most part it does an amazing job of building up the dark and weird world of the Neath.

After a very slow and frustrating start, Sunless Sea completely drew me in. I found myself eager to uncover every last scrap of map and see what horrors lurked there. I began venturing further and further from the safety of Fallen London, stocking up with as much fuel and supplies as I could carry, and making a rough calculation about how far I could get – and more importantly, whether it would be enough to get me back. In this sense, Sunless Sea is an excellent recreation of the pioneering voyages made during the Age of Sail, when captains ventured out into uncharted waters with little idea about what they would find. I regularly found myself heading for home with a badly mangled hill and an engine running on fumes, hoping against hope that it would be enough to see me back to port. There’s a palpable relief at setting foot in London again, selling all the booty you’ve procured for a healthy profit and relaxing in your house for a night, the terrors of the sea a distant memory.

Although the game is mostly text based, there is a little combat action involved when meeting sea monsters or pirates out there in the Unterzee. Unfortunately these battles are pretty scrappy, with very little strategy involved save for reversing away while firing your guns as fast as you can. A timer shows your aiming accuracy – if it’s full you’ll get a definite hit, but if you fire before then, there’s a high chance you’ll miss. This means combat is a plodding affair, as you spend most of it just waiting for your guns to aim. That said, it’s quite terrifying when a monster looms out of the deep while you’re limping back home with a handful of hit points remaining on your hull, prompting a high-speed dash for safety.

Despite many hours of play, I still haven’t yet got my hands on a Zubmarine – but I’m hooked now, and I’m determined to get one to unlock the secrets of the deep. Like everything in this game, the process of building a Zubmarine is slow, involving a gradual accumulation of the goods and knowledge you need. Still, I’m not in a hurry – I’m having too much fun just exploring the inky ocean.

Sunless Sea is most definitely a niche title – a text-based game with a glacially slow pace certainly won’t be for everyone. And it doesn’t help that it’s bewildering at the start, with a very slow build up. But once you’ve put in the hours, it really opens up into a fascinating, freeform game that’s packed with surprises and terrifying tales.

Disclosure statement: Review code for Sunless Sea was provided by Failbetter Games. A Most Agreeable Pastime operates as an independent site, and all opinions expressed are those of the author.