Writing a review for The Banner Saga 3 has been a tribulation.

It’s less about the game mechanics and design behind it, and more about your journey through the end of days. I suppose you could start the game fresh, knowing that there’s plenty of refinement and choices to be made, but I’d heartily recommend you don’t. Start from the beginning. If there’s one thing I’d implore you to do, that would be to begin your trek as the lowly Varl bill collector and watch your band grow, then shrink – and make tough decisions that often end poorly even with the best of intentions. The impact of the original game echoes through subsequent titles and helps endear you to your weary crew, unwitting heroes and bastards alike.

The Banner Saga 3 continues the tradition of beautiful, hand-drawn Nordic fantasy worlds filled with curious races, copious amounts of snow and an ability to make jaws drop with its wide vistas. Its soundtrack is haunting and somber. Its voice acting sullen and heart-felt. Its thematic aesthetic feels familiar and borrowed, but also feels like it is its own thing. It’s an epic in the vein of The Lord of the Rings and A Song of Fire and Ice, and it definitely feels the part. I can’t think of many games that are as sweeping. 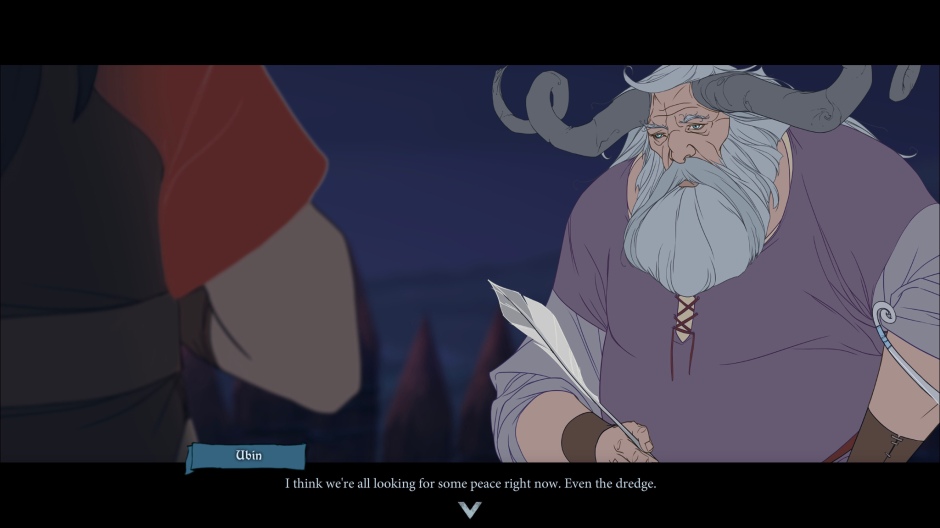 The final installment of The Banner Saga is a play in two acts: those who are attempting to keep the peace in what is left of the world and those who are looking to end the madness on a lonesome and challenging journey. Regardless of whether you’re watching a caravan travel to the gates of hell or trying to stop the world’s last stronghold from becoming one, the plot and the decisions you make within are paramount. Everything has a familiar cadence; watching folk travel, partaking in gut-wrenching and uncomfortable conversations and taking part in turn-based battles on a ¾ viewpoint warzone. Beyond some new (and aggravating) enemy types, everything feels tried and true. I did get to a point where fighting felt like a slog, but my desire to see what my decisions had wrought was strong enough to pull me through. In a world where you’re often led by the nose to the next shiny new game, I’ve learned to slow down and appreciate those experiences. I play far fewer games than I used to, but the impact of the ones I do choose to engage in are usually fruitful. There have been things like the Mass Effect series or Fallout that give you the illusion of choice, but never completely feel within your control. Whether or not the ending of The Banner Saga 3 was predetermined or not, it at the very least felt like my own personal story. And that, my friends, is why The Banner Saga trilogy is one of the grandest choose-your-own-adventures you’ll ever partake in.

The Banner Saga 3 is available for PS4, Xbox One, Switch, iOS, Android, Mac and PC. We reviewed the Switch version.

Disclosure statement: Review code for The Banner Saga 3 was provided by Plan of Attack. A Most Agreeable Pastime operates as an independent site, and all opinions expressed are those of the author.