What ho, chums! It’s been a while since we last sat down for one of these chats. In fact, it’s been seven months, by my reckoning. How time flies.

Well, let me tell you, I just can’t get enough of that sumptuous video game, Sunless Sea. I reviewed it the other week, but I’ve kept on playing it, and it just gets better and better. Events keep popping up willy nilly – just when i think I’ve exhausted the story opportunities, something new hoves into view. And the Zubmarine! Once you get that, there’s a whole new map to explore underneath the Unterzee. It’s wonderful. And the stories! So utterly bizarre and compelling.

I’ve got a stack of review codes waiting for my attention – including Hollow Knight and 428 Shibuya Scramble to name just a couple – but I just can’t tear myself away from Sunless Sea. I’m near the end now, and I’ll be sorry when it’s all over – there will be a long wait until the sequel, Sunless Skies, is released next year.

BUT. The thing is, I probably would have given up on Sunless Sea after a couple of hours if I hadn’t been sent it to review. We always review games that we’ve requested code for at AMAP, even if it sometimes takes a while. We get around to everything eventually – after all, it’s only polite. But if I hadn’t had that impetus for Sunless Sea, I’ve no doubt I would have put it to one side and forgotten about it, instead delving for something else in my huge pile of unplayed games. And I would have missed out on something very special. 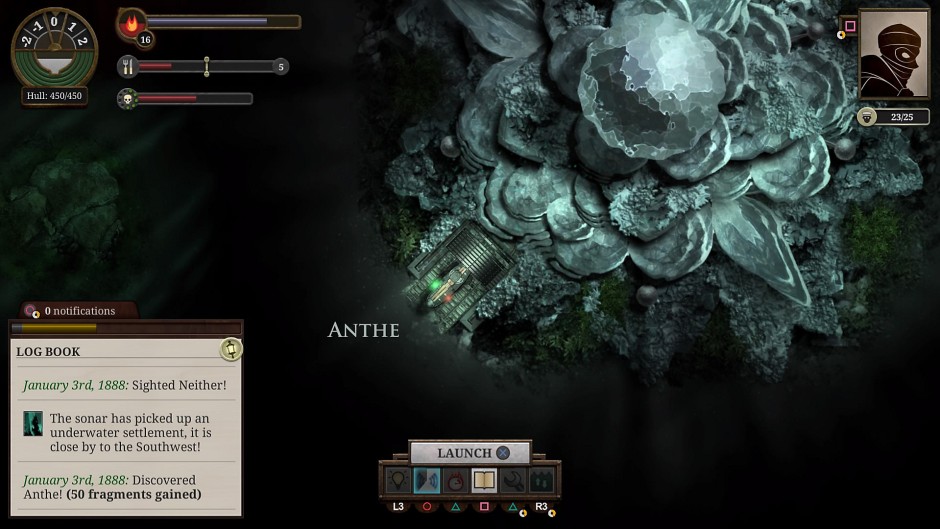 As I said in the review, it has a slow and confusing start, with little explained to you and harsh penalties for failure. I quite like games that ask you to work things out for yourself, like the wonderful Hob – but that game was accessible and introduced its mechanics gradually. Sunless Sea, on the other hand, quite literally throws you in at the deep end. It was a good few hours before I had the slightest notion of what I was doing. It gets a LOT better, but you need to put a lot of time into it first.

Sunless Sea is far from the only game that requires a bit of a plod before you get to the good stuff. Just a few days ago, Polygon ran a column with the risible headline ‘Assassin’s Creed Odyssey really picks up after the first 15 hours‘. The satire website Hard Drive was quick to point out that its parody article on impossibly slow RPGs was now being recreated in real life.

Essentially, slow build-ups like this are the fault of poor game design. If you have to play for 15 hours just to get to the good bits, then something has gone very wrong. We now live in a time where games are incredibly cheap, mostly very good and available almost instantly through digital downloads. If a game isn’t grabbing your attention after a couple of hours, then there are dozens more you could play instead – it’s not like the 8-bit/16-bit era, when games were expensive and relatively scarce, so you had to wring all the enjoyment you could out of each one. I distinctly remember completing The Flintstones on the NES, even though I didn’t enjoy it very much – it just happened to be the only game I had to play that I hadn’t already finished, and I couldn’t afford any more. That is most definitely not the case in 2018.

Essentially, games that stuff their early hours with dull exposition, busywork and pointless subquests are disrespecting your time. Any game that just expects you to grind for hours to get anywhere is essentially saying you don’t have anything better to do. Well, you know what? There are plenty of other games I can play.

Sunless Sea may not take as long as 15 hours to get going, but the first couple of hours could definitely do with tightening up – I’ll bet that a huge number of players will have given up after struggling to get anywhere or understand anything that’s going on in the game. I can’t wait for Sunless Skies, but I also hope that it’s a bit more respectful of my precious time.