If you haven’t played any of the Valkyria games, here’s why VC4 is so damned good. Oh, and don’t worry if you’re new to the series – Valkyria Chronicles 4 is completely self-contained, so it matters not a jot if you start playing this with no knowledge of the previous games.

The Valkyria games are pretty unique in their version of tactical strategy. You select a team of soldiers of different classes in much the same way as a game like XCOM, but the difference is that when it’s your turn, you take control of each character in real time. If you get too close to enemy characters, they can engage in interception fire, but you can reduce the amount of damage you take by crouching behind sand bags or other objects – so tactical positioning is key. Clicking the R1 button to aim pauses the action, allowing you to line up headshots for more damage.

Each character class has a different amount of AP, so they can run for different distances, but each can only perform one action per turn, whether that’s taking a shot or healing or something else. And whereas the previous sequels have veered from this template in varying amounts, culminating in the poorly received action-game spin-off Valkyria Revolution last year, Valkyria Chronicles 4 goes right back to the systems of the first game – and is all the better for it.

It’s even set in the same time period as the first game, during the Second Europan War, a facsimile for World War 2. But whereas the original focused on the invasion of the independent nation Gallia, number four is set during Operation Northern Cross, the Federation’s effort to invade the nasty Empire and take their capital. As such it has a grander scope, and a pretty epic campaign.

Combat is very similar, with the Scouts, Engineers, Stormtroopers, Lancers and Snipers from the original game. Each has strengths and weaknesses: the Scout can move long distances, for example, but has low health and firepower, while the Stormtrooper has high health and attack albeit with a short movement distance. But now these classes have been joined by a new one: Grenadiers. This class makes a massive difference, as they’re able to hit enemies with mortars from behind cover and at long range. But they’re hobbled by low movement, HP and ammo, so the game still retains its wonderful balance even with the addition of a powerful new class.

Another big change is the addition of an APC, an armoured car that you can use to ferry troops to distant destinations on the map – but with the caveat that it’s much more fragile than a tank, and if it’s destroyed, everyone inside is taken out as well. This and the Grenadiers really shake up how you play the game, giving you oodles of tactical approaches for each level. 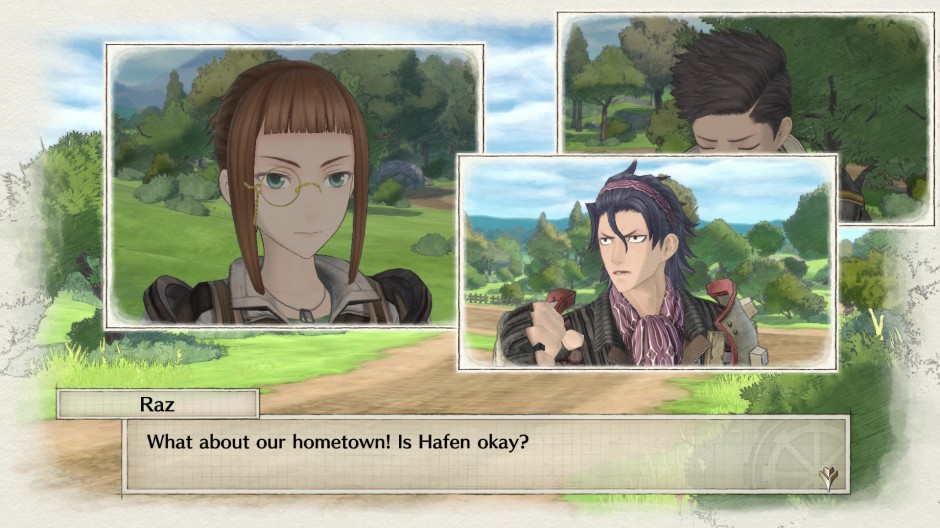 And like the original, the levels are wonderfully designed, often with surprising events halfway through that force you to change up your tactics on the fly – like a hidden tank bursting onto the scene, or a sudden change in objective. In short they’re a joy to play through, and some of the meatier ones can take an hour or more to finish first time around (although thankfully you can save your progress at any time).

Valkyria Chronicles 4 also has a lot more meat on its bones than the first game in the series. In addition to the 18 story chapters and optional skirmishes, there are a dozen or so Squad Stories to unlock. These are activated when you use one of the soldiers in your squad a set number of times, and they’re really fun little episodes that fill out some back story on the characters. The varied cast is one of the game’s highlights, so it’s great that you have the option to delve more into their past.

The main story is brilliant too, a mix of lighthearted fun and deathly serious and dire situations. For a game that’s so bright and colourful, with its gorgeous watercolour aesthetic, it goes to some very dark places indeed. I won’t spoil it for you, but there were a couple of points at which I drew a sharp intake of breath and may have uttered a “whoah” or two. The localisation is also one of the best I’ve ever seen – there’s some wonderfully natural dialogue that goes above and beyond the stilted conversations you often get in poorly translated games.

I’m around 75 hours in to Valkyria Chronicles 4 now, and although I finished the main campaign many, many hours ago, I just don’t want to stop playing. I’ve been happily ploughing my way through the post-game content as well as the ongoing DLC – three DLC episodes have been released already, with another three on the way over the next two months, and I’ve eagerly marked their release dates in my diary. I haven’t enjoyed a game this much in ages – at least since Monster Hunter World earlier this year.

It’s not perfect, however. Sometimes the AI behaves very strangely indeed, with enemy soldiers running back and forth for seemingly no purpose. And I had to roll my eyes at some of the traditional “anime lechery”, as the Edge review put it. If I tell you that one of the DLC episodes unlocks swimsuit options, you’ll get what I mean. It’s presented as harmless fun, but frankly I found it a bit embarrassing. Still, I challenge you to show me a Japanese RPG that DOESN’T have bikini unlocks – it seems to be an indelible item on every game-development tick list. It seems not that much has changed since I wrote this article all those years ago.

But these minor gripes aside, Valkyria Chronicles 4 is an absolute triumph with huge scope for replayability – only the other day I stumbled across a clever strategy that allowed me to finish a level I’d previously slogged through in just two turns, thanks to some ingenious applications of the ‘Orders’ you can use to buff your troops. And some of the post-game content is utterly devious, leaving me scratching my head about how to proceed, before eventually hitting on a solution.

It’s those “But what if I try this?” moments that make this game so enticingly rich and satisfying, a real puzzle for you to pore over and enjoy for hours at a time. After some wayward sequels, Valkyria Chronicles 4 is a triumphant return to form for Sega’s series – here’s hoping that it sells well enough for the publisher to green light another title in the same vein.