There are so many 8-bit-inspired games at this point that you could almost jokingly call it a genre. Don’t get me wrong, I love pixellated graphics, chip-tune soundtracks and solid platforming, but these days you can’t wade through any digital storefront without stubbing your toe on an 8-bit wannabe.

But while most developers are dipping their buckets in the same tired well, Christophe Galati, the designer behind Save Me Mr Tako!, is sipping from a refreshing and cool bottle of mountain-spring water. In the end it’s the same old 8-bit style, but with a simple change of perception it seems new and different. 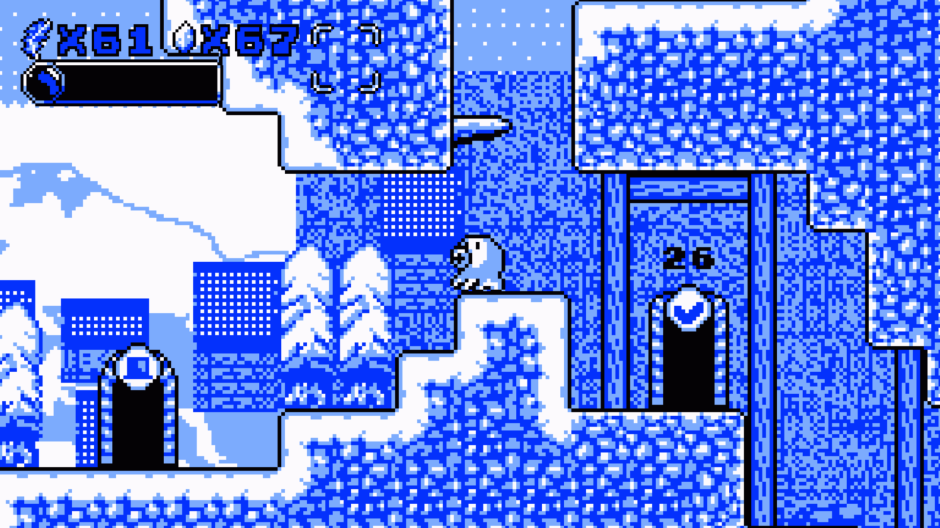 Save Me Mr Tako! Takes its inspirations specifically from Nintendo’s charming little Game Boy. It creates a lot of depth and detail in its four-toned aesthetic, and you can change the color palette to fit your mood. At the click of a shoulder button, I often found myself using red hues for a forest or blue tones for wintery mountains. Or you can go with black and white, inverted colors or even puke green, if you want.

But this theme goes beyond visuals; you can see Galati took inspiration not just from the hardware but from its library. The game’s overworld is a series of doors on a plain that smacks of Kirby; a beach scene eerily feels like The Legend of Zelda: Link’s Awakening. It’s more than just a mere “love letter;” it feels like it embodies the entirety of what the Game Boy was about.

That’s all for naught if the game itself doesn’t hold up. In that regard, I can give Save Me Mr. Tako! a solid recommendation as well. The game is a through and through platformer, with well-designed and concise stages and a floaty but very controllable jump. Our cute cephalopod hero starts with a base attack that has him stunning enemies with blobs of ink, allowing him to use them as platforms for a short time to reach new areas and secrets. Also akin to the aforementioned pink muse, Mr Tako collects various hats that give him powers (and an extra hit point), as well has make him even more sickeningly adorable than he already is.

Nothing in Save Me Mr Tako! feels built around any of these ancillary powers. As someone who has grown up mashing A to jump for three decades, I’ve been attuned to that kind of design. There are a few instances where there is a specific hat you need, but for the most part they’re meant to be experimented with. There aren’t any overt explanations for anything, so your best recourse is to don a hat and go play with it. Some will become go-tos; others will get you through particularly sticky wickets. Some you won’t use beyond the time you initially get them.

No matter which topper you wear, the hats are a necessity if only for the extra hit point they provide. Just like Mario of yore, a single hit will take you back to the start of the level (or a checkpoint, Christophe isn’t a savage), so you have to be mindful of what you’re doing. Save Me Mr Tako! isn’t hard per se, but it doesn’t pull its punches, either. Every lost life was my own fault, either because I was hurrying out of frustration or making miscalculations. But rather than shouldering a hit and moving on, I had to start over. Boss battles can be tough, but pattern recognition will save your bacon where a life bar won’t. 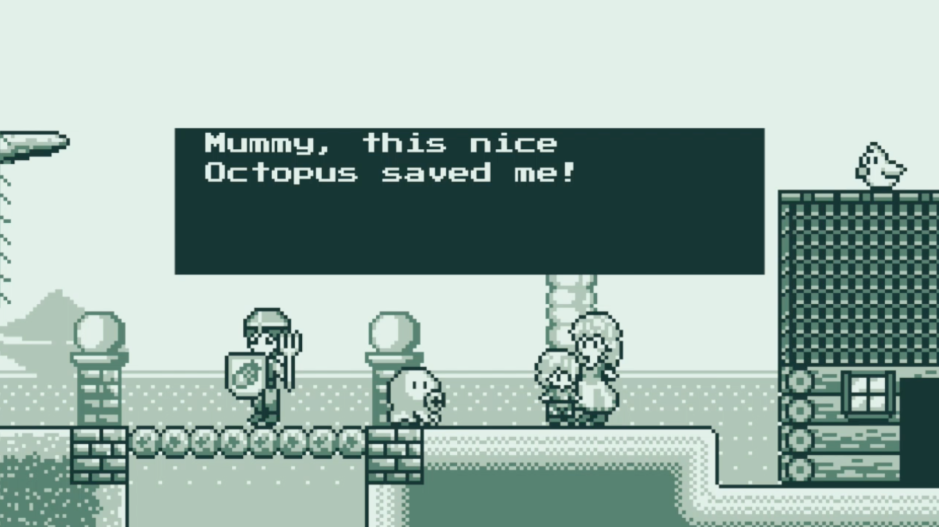 I don’t have any particular fondness for the Game Boy beyond the few games I’ve downloaded well beyond its heyday. What I lack in nostalgia is made up for in an appreciation of how lovingly crafted Save Me Mr Tako! is. Its whimsical monochromatic design is so charming that, at least while I was playing it, I maybe felt what it was like to be one of those kids who owned a brick with buttons. Even if it didn’t warmly envelope me in its sentimentality, it’s a great platformer in its own right. Luckily, I got the best of both worlds.

Save Me Mr Tako! is available for Nintendo Switch and PC. We reviewed the Switch version.

Disclosure statement: Review code for Save Me Mr Tako! was provided by Nicalis. A Most Agreeable Pastime operates as an independent site, and all opinions expressed are those of the author.