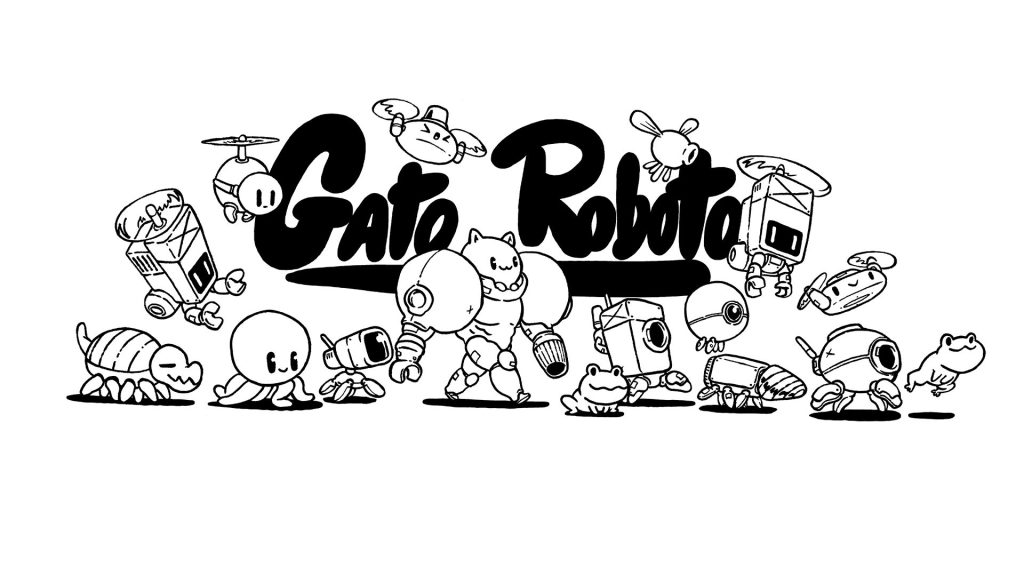 A Metroidvania featuring a cat in a mech suit? Yep, it’s a great idea that, unsurprisingly, makes for a great little game.

It also features an astronaut called Gary, and at this point I’d like to make a plea for more video game protagonists with prosaic names. We’ve got plenty of Samus’s, Cloud’s and Link’s, and not enough Gary’s, Ian’s and Terry’s for my liking. Still, at least we might be getting another Alan soon.

Gary is flying through space, minding his own business, when he picks up a distress call from an abandoned research station. As he flies in to investigate, his pet cat leaps onto the controls, causing the ship to crash, and injuring Gary. Since poor old Gary is trapped in his spaceship, naturally it’s up to his cat to investigate the distress call – cue the world’s first Meow-troidvania.

Luckily, the cat quickly comes across a mech suit that provides some measure of defence from the nasties infesting the research station, as well as a lovely upgradeable cannon and missiles. But to get through some of the puzzles that the game throws at you, you’ll periodically need to leap out of the mech suit and scramble up walls with your claws to hit switches, or squeeze through tiny gaps.

It’s a lovely idea, and the cat controls in particular are delightful – skittering up walls is a constant delight. And in general, the game has a wonderful sense of charm to it, particularly in the conversations between Gary and his cat. Even though the cat’s responses are limited to meows, there’s a lot of nuance wrung out of those two syllables, combined with some characterful cat animation. In fact, the 8-bit style monochrome graphics are dripping with charm – it’s incredible just how much the developer Doinksoft has done with so little.

Away from switching between the cat and mech suit, however, the game mostly follows the tried and tested Metroidvania format. The usual suspects make an appearance, like upgrading to a double jump to reach high platforms or picking up missiles to blast through walls. It’s nothing we haven’t seen before, but it’s all put together beautifully with some intuitive level design, along with that aforementioned charm. And I particularly liked the addition of a submarine in one of the flooded areas, which reminded me a lot of the spaceship Mario pilots in the Game Boy classic Super Mario Land. Was that intentional? I wouldn’t be surprised if it was, as in many ways Gato Roboto is a tribute to Nintendo’s monochrome wonder, right down to the fact you can collect a filter that replicates the green tinge of the GB.

Thankfully Gato Roboto is a lot more forgiving than the Game Boy titles of old, however – if you’ve ever returned to Metroid II recently, you’ll know the frustration I’m talking about, with its unforgiving enemies and widely spaced save points. By contrast, Gato Roboto is a joy to play through, with regular save spots meaning you never have to track back too far after buying the farm. There are also plenty of hidden collectibles to find, most notably those filters which change the colour of the screen. I must admit though, after collecting around half a dozen of them, the novelty of changing the screen to a slightly different shade of pink, purple, green or whatever started to wear off – although finding a yellowy-green filter called ‘Urine’ did make me smile. (Yes, I’m puerile.)

Gato Roboto is also pretty short – I finished the whole thing in around four hours, picking up most of the collectibles. But then again it’s pretty cheap (currently around $7.99 on Switch), so it’s more than worth the money. Lovely.

Gato Roboto was developed by Doinksoft and is published by Devolver Digital. It’s available on Steam and Switch. We reviewed the Switch version.

Disclosure statement: review code for Gato Roboto was provided by Indigo Pearl. A Most Agreeable Pastime operates as an independent site, and all opinions expressed are those of the author.