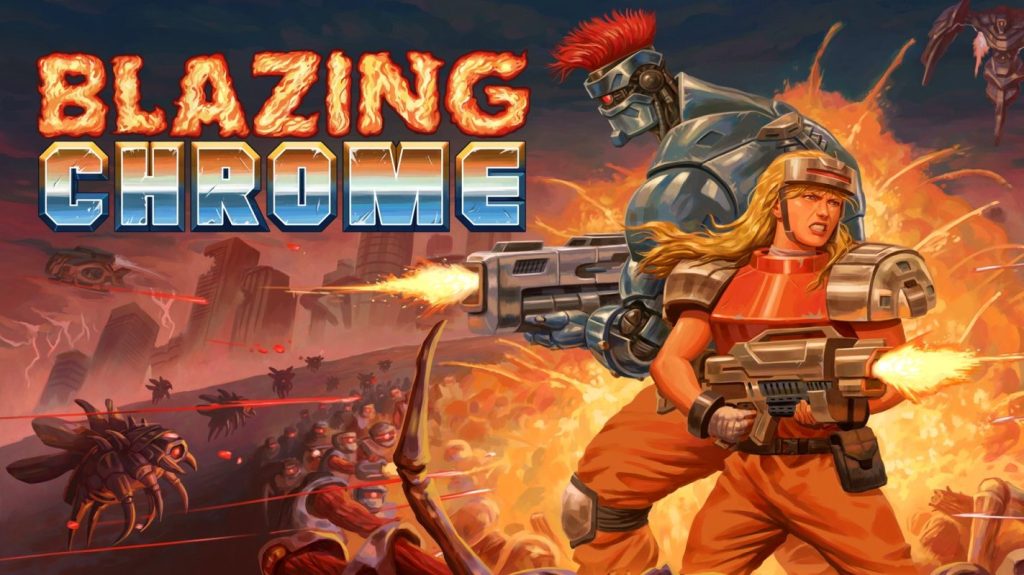 With the recent release of the Contra Anniversary Collection, I was reminded that (a) run-and-gun side-scrollers are few and far between in this day and age, and (b) I forgot how much I liked them. At my age I usually don’t have the type of tolerance and patience for pattern memorization and one-hit kill trial-and-error, but there’s something about training yourself to be an ineffable soldier who can dodge a barrage of bullets, take out hordes of nondescript terrorists and jump over chasms while looking good.

Blazing Chrome, by JoyMasher, is the most loving homage of Konami’s seminal Contra series I’ve seen to date. At first blush it looks like it could be a direct sequel to Contra III: The Alien Wars with its 16-bit trappings. And luckily for us, it doesn’t just look the part, but plays it as well.

Our heroes, a rebellious human named Marva and an insurgent robot called Doyle, team up (or individually if you’re short on friends) to take on a robotic uprising through five distinct and challenging levels. The action is mile-a-minute in that there is no rest for the weary, lest you want to get destroyed. The name of the game is frenetic, twitch-based action that has you constantly moving forward as you blast everything in your way. Most enemies crumple in a satisfying manner, quickly replaced by another as you hop, climb and collect very Contra-reminiscent power-ups like wave guns and grenade launchers.

The game never dwells on anything for too long, which is to say that there’s a lot of variety packed in between the typical moments you’d expect. Some levels have you riding careening vehicles, dodging and weaving as you speed to the finish lines. Others test your platforming mettle with beams you can grab on to as you try to move hand-over-hand and shoot at the same time. You also get to occasionally pilot a mech suit that not only gives you an actual, honest-to-goodness life bar (hooray!), but also a sense of empowerment as you trample your way across the stage.

Most levels are punctuated and end-capped with evolving boss fights that test your ability to discern patterns without getting hit in multi-phased battles. I often struggle with this kind of thing, often accusing a game of being cheap, but everything I saw in Blazing Chrome felt fair, and most failures could be chalked up to poor timing on my part. Whereas I’d often give up and walk away for a bit after such a throttling in other games, here I just wanted to jump back in to see whether I could keep all my lives and give that mechanical monstrosity another go.

While I’ve admired JoyMasher’s other games – Odallus: The Dark Call and Oniken – for their adherence to retro gaming tropes, it’s Blazing Chrome that has grabbed me the most, because it captures not just the tone of Contra but the feel of it as well. I can’t wait to see which classic they tackle next.

Blazing Chrome was developed by JoyMasher and is available on PC, Switch, PS4 and Xbox One. We reviewed the Switch version.

Disclosure statement: review code for Blazing Chrome was provided by Indigo Pearl. A Most Agreeable Pastime operates as an independent site, and all opinions expressed are those of the author.