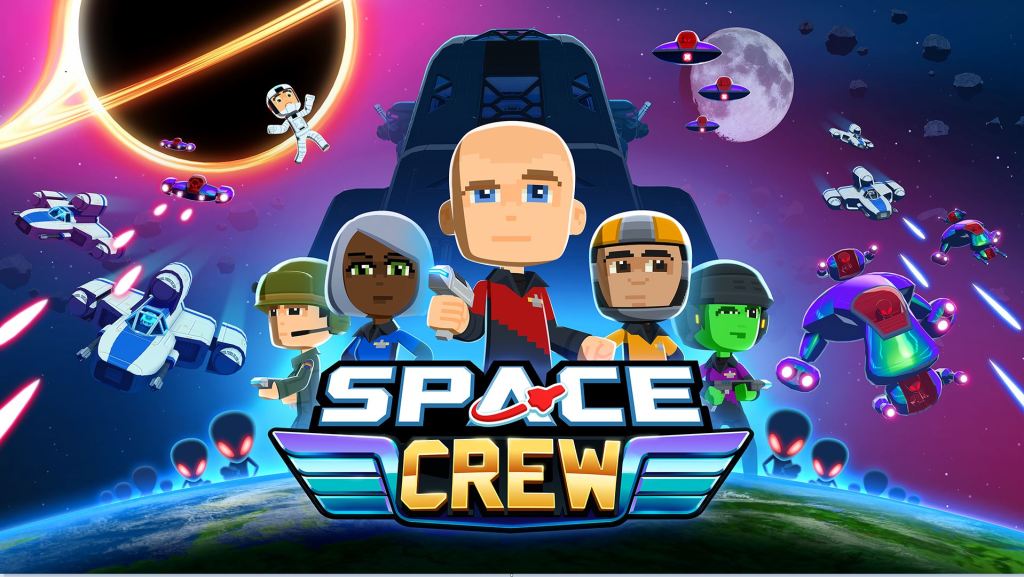 I’ve been catching up with a few of the games I received for review late last year but didn’t have time to play, and Space Crew is a real beauty. Don’t let the cutesy looks fool you, this is a hardcore spaceship simulator, with frantic decision-making and harsh penalties for failure.

The developers Runner Duck are also behind Bomber Crew, which Matt reviewed back in 2018. The set up for Space Crew is similar (except in space, natch), with your job being to direct crewmates towards various tasks on the ship while holding off waves of enemy fighters. The spaceship, which you can customise in a variety of colours and designs, has four gun turrets as well as systems for engineering, navigation and shields, and as the ship takes damage, you might end up having to divert a crew member from their post to extinguish fires or repair critical systems. If things get really bad, aliens might invade the actual ship, so the crew will have to stop what they’re doing and grab a plasma rifle to repel boarders.

The gunners will automatically target nearby enemy fighters, but only if you tag them first. So combat generally involves zooming out and rotating around the ship to tag enemies, then zooming back in to juggle systems power and deal with any repairs or fires, before zooming out again to tag any newly arrived fighters. You can divert power to weapons, engines or shields, and activate crew members’ special skills, like evasive manoeuvres or super-quick shield regeneration. Any crew member can take any position, but they’re better at their specialism – the engineer is quicker at repairing damage, for example, and the gunners are more accurate at shooting down enemy ships.

Combat is enjoyably frenetic, and you’re often faced with multiple problems at once, like failing shields combined with enemy invaders and multiple fires. Thankfully there’s an option to slow down time for a little while to help you manage all the problems, but even so the game can be incredibly challenging, and often you’ll limp home at the end of a mission with your hull barely intact and several crew members at death’s door.

Shooting down enemies provides XP, which levels up your crew and unlocks new skills, and missions also reward you with cash and research points. The research points unlock upgrades for your spaceship and crew equipment, but you’ll need to buy these upgrades with cash – and unfortunately, cash is in short supply. Riskier missions will provide better rewards, but generally each mission only nets enough moolah to buy one or two upgrades – that means you’ll be grinding through the lower level missions several times to get enough firepower to take on the tougher ones.

Taking on these harder missions is high-stakes stuff, because losing your whole ship and crew on a mission gone awry is nothing short of a disaster. It means starting out again with inexperienced new recruits and a basic spaceship, prompting another round of grinding through low-level missions to beef up your ship again. You can add escape pods to your ship in an effort to save your crew – and their precious experience points – if things go south, but there’s also a chance that the pods won’t be picked up and some of your crew members will die anyway. And escape pods aren’t cheap to install in the first place, which seems a little mean to be honest. On the positive side, the research points you’ve accrued aren’t lost, so you still have access to previously unlocked equipment – but raising the cash to purchase it all again is a very time consuming process. Space Crew autosaves, too, so there’s no going back to a previous save if your ship gets blown to kingdom come.

Overall I’ve found the combat in Space Crew deliciously frenetic, as battles rapidly transition between periods of relative calm and bouts of heart-in-mouth panic. But the harsh penalties for failure can be very off-putting, even if they make for high drama. After six hours of play, and after losing my spaceship for the second time, I can’t quite face grinding through all the missions again to get back to where I was. Perhaps if the story was more compelling – or if there were branching paths and more variety in the missions – I might be more tempted to dive back in. But as it is, Space Crew is a brilliant game hobbled by some frustrating grind.

Space Crew was developed by Runner Duck and published by Curve Digital, and it’s available on PC, Switch, Xbox One and PS4. We played the PC version.

Disclosure statement: review code for Space Crew was provided by Curve Digital. A Most Agreeable Pastime operates as an independent site, and all opinions expressed are those of the author.