Warioware, Inc.: Mega Microgames! (2004) – If I were asked by a couple of muckrakers in the streets what my favourite box art of all time is, I’m not sure there’d be a moment’s hesitation before I belched out the word Warioware.  For mine Warioware, Inc. contains the greatest ensemble cast ever put to cartridge and so to feature them all on the cover in a Brady-Bunch like way already wins my heart.  But it’s the appearance of a new-look Wario, the very same design that has evolved over the years to become modern Wario in fact, that makes me giddy with excitement.  Gone is the joke play on words Wario who dons a plumber’s outfit just like his arch-rival Mario, and in is evil maniacal industrialist Wario who has taken his thirst for riches to the next level.  Wario is for me is Nintendo’s strongest property, and while the games were always fantastic, it’s in Warioware for me that his character really hit its stride.  And so if those very same muckrakers asked me what the greatest game ever made was, my answer would likely be one and the very same.  Yes.  Warioware, Inc.: Mega Microgames! is that good. 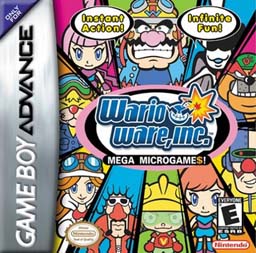