DK: King of Swing (2005) – I have to admit that I absolutely love the redesign of Donkey Kong that Rare did for Donkey Kong Country.  Obviously Nintendo did too, because despite having their own Donkey Kong game released that same year featuring a dramatically different looking Donkey Kong, it’s Rare’s version that won Nintendo’s war of the Apes.  At a time when Nintendo risked being left behind by the 32-bit consoles, the lure of the three dimensional sprite was just too hard to resist, and so the modern image of Donkey Kong was born.  After all, who needs two dimensions when you can have three?  And the world agreed, because Donkey Kong Country was an enormous success.

Which is why I love the box art of DK King of Swing so much, because Nintendo have taken the design of the 3D sprites of Donkey Kong and Diddy Kong, and redrawn them in the two dimension form they took 10 years before.  It’s an awesome time paradox, and DK: King of Swing is almost an admission that like fashion, technology is a fickle and cyclical beast. 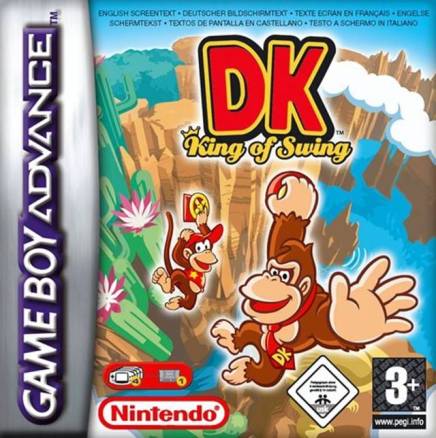