Magna Carta 2 (2009) – While everyone is fawning over Japanese art, there’s a whole world of great stuff being produced just a small boat ride away.  Korea is not only a great producer of pop culture, exporting music, film and television not only to Asia but increasingly across the world, and it’s visual artists like Hyung-Tae Kim that show why the nation is such a cultural force.  The box art for Magna Carta II is a great example of his work, and is typical of his beautiful character designs, injecting a certain effeminate sexuality to both genders that makes it rather easy on the eye.  The way in which he captures the beauty of the human form – as exaggerated as it is – and the striking detail on the characters’ is what makes this such a striking piece of visual art and him such a special talent.  Korean “Manhwa” art isn’t as pervasive as its Japanese counterpart throughout the video game industry, but it’s a desire for inspired pieces like this that make me hopeful that Korea continues to expand its influence and its cultural reach through the video game medium. 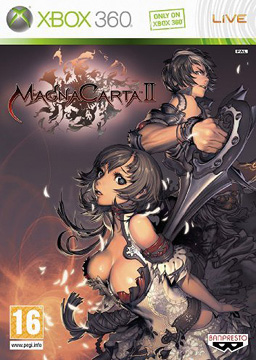