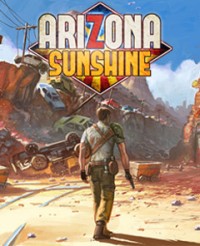 One more extremely slow and careful try, making sure the two sights were lined up precisely with each other and at exactly the right angle to my target, and I FINALLY got that headshot. This was not a good start. I pressed on, hoping that this would improve somehow, that maybe when I got some new weapons they would be more efficient, but the only difference between the new guns I found seemed to be the firing rate, which made the accuracy even worse. You can probably imagine that once the game starts throwing large groups of zombies at you, you really don’t have time to be slowly taking manual aim at each one of them. All you can really do is wait until they’re dangerously close to you and try to fire blindly into their heads at close range, because that’s about the only chance you have of actually hitting them in the head on short notice, and being zombies, if you don’t hit them in the head they just keep coming at you. Oh, and you have limited ammo too. This just gets better and better though.

Just kidding, it gets way worse. After playing for 20-30 minutes, the calibration had slowly shifted so far off center that the game became unplayable. I had to quit the game and restart it, because it’s yet another VR game where the in-game re-centering option doesn’t actually work. Now, when you start Arizona Sunshine, you find yourself in a small room that acts as the menu screen, as a lot of VR games tend to do, except in this one you start on the other side of the room and have to walk over to a screen where you have to manually insert different cartridges to get to different selections like “start game”, “options”, and etc. This probably sounds pretty cool on paper, but isn’t a whole lot of fun when you start the game and find that you’ve spawned inside a couch, can’t move because you’re in smooth turn movement mode instead of teleport, and so can’t reach the options menu on the other side of the room that would allow you to change the settings so you could get out of the couch.

After a few minutes of virtual wriggling, I was able to glitch myself out of the couch, but at this point I was rapidly losing patience and interest with the game. I tried one more time. Something else I found rather annoying was the fact that pressing down on the left stick makes you do an instant 180 degree turn, and since you’re constantly using the left stick for moving forward, you will inevitably accidentally move it downward at times. This can be deadly if it happens during a fight, and you can’t change or disable this setting at all. Not good.

Anyway, I got to a part where I was told that I needed to find the keys to a certain car, so that I could search it for an important item I needed. I looked at the car and noticed that one of the windows was completely open and sighed. I went ahead and followed the convoluted path to find the car keys and continued on a little further anyway, but it wasn’t much longer before I just lost interest completely. I quit the game, removed my headset, and found that I had received a bonus motion sickness headache for my troubles on top of everything else.

Let me tell you, I was extremely disappointed by all of this. Where Farpoint had showed me how incredibly fun and well produced a VR first person shooter could be with the Aim controller, Arizona Sunshine had showed me the exact opposite. After having spent $35 on this game, I still wasn’t ready to give up on it even after all of this. I talked to a friend of mine who bought the game, but doesn’t have Aim or Move controllers, and so played it using a standard controller. He made it sound like alternate controls worked a lot better, which seemed to make sense to me, because this game was actually originally designed with motion controllers in mind, and the Aim compatibility was added on after-the-fact.

So I got all set up and started the game up with just a standard controller, wanting so much to be able to justify that $35 I spent on this game. Unfortunately, the aiming was every bit as bad as before. In fact, the controls were even worse this way because on top of the previously mentioned left stick problem, you’ll find that using a non-Aim controller also now makes it so that pressing the right stick up makes you teleport, even if you’re not on teleport movement mode. The right stick is also used for turning, so now if you press the wrong direction on either of the sticks that you’re constantly using both of, you’ll find yourself turned around or randomly teleported into a new position and direction. You cannot change either of these settings at all. What were they thinking?

In addition, if you change from an Aim to a standard or Move controller (or vice-versa) you have to start a new game from scratch, and…I even got stuck in that damn couch again too. Yep. I’m done with this game. What a waste.