I’m not one to start bragging about my toys unsolicited, but Sir Lucius was kind enough to ask, perhaps not realizing that like some nerdy vampire, once invited, I will be all up in your business.

It was this or have children, so we went for the TV.

This particular TV has an Android OS capable of emulation and external flash and hard drive use so just about all my old-timey console games are now playable directly on the TV, which is good because there doesn’t seem to be any room left in here to plug any more consoles into this thing!

Let me also add, for anyone wondering, that the 4K hype is absolutely true (especially if you have HDR too). It’s a costly transition, but it’s a bigger difference than you might think. Going from HD to 4K felt just like going from SD to HD. Once you get there you’ll never want to go back.

Across the way is the console game cabinet, which is holding most of our console games from the last decade or so. Anything else older than Xbox 360 is either in storage or converted to digital because there just isn’t room for all this stuff. Looking at it now, I guess it’s almost time to stick these 360 games in storage since this thing seems to be about full again.

And while I do tend to prefer having the physical versions, there’s just so much stuff coming out in digital-only form or on sale for much cheaper in the digital version that our library has been becoming increasingly digital over the last year or two. I don’t know the exact number, but at this point there are just as many, if not more, digital games on the most used system (PS4) than there are physical ones on our shelves.

We do still have the Wii, Xbox 360, and PS3 on the old TV in the bedroom, and I even dug out the old PS2 a while back, but they don’t see as much use as they used to.

Like Professor GreilMercs, we prefer to hoard all our old systems and games and never get rid of any of them except in the rare cases that a system becomes redundant or when something is so awful it needs to be removed. There are a bunch of older things in boxes in closets that we’d like to have displayed, but there just isn’t room for them in this place. Someday…

I wasn’t always that way though. When I was a kid my family was semi-poor, so I’d usually have to end up selling my previous system and games any time I wanted a new system. I ended up losing almost every system and game I ever had, which I regret, but on the other hand, it did give me a wide range of experiences that I wouldn’t have been able to afford otherwise. Maybe this was why I started to gravitate more towards PC gaming in my teen years, because there wasn’t much of a resale market for those games, so you were usually stuck with them forever once you had ’em, and boy was that eternal (at least it seemed eternal at the time) backwards compatibility capability great.

Here is my desktop PC in my office. Around 5 years ago it was a top of the line super gaming machine. Around 4 years ago it became obsolete. I used to be heavily into PC gaming for the longest time, but the older I get, the less patience I find myself having for all the PC gaming troubles. Constant need for upgrades, frustrating incompatibility issues between games and your hardware or software, Windows getting worse and worse (and less and less compatible with older games), and other random problems that seem to keep popping up all the time.

These days I only fire it up to play old DOS games or those few increasingly rare PC-exclusive indie games, but I do enjoy those old DOS games quite a bit…

Speaking of my office, I’m going to go ahead and show off the rest of it, despite it not being particularly video game related, because I so rarely get the opportunity to do so (it’s hard to show off and be a misanthropic hermit at the same time).

Some of you may already be aware that I have something of a comic addiction, but I CAN STOP ANY TIME I WANT (I so can’t)! 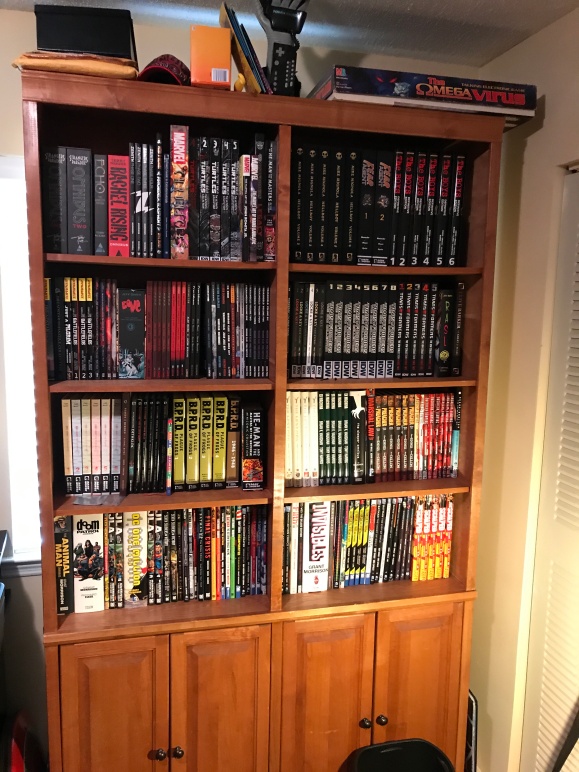 I remember when it was just this one bookshelf, then I had to get three more (which are actually cheap-o Wal-Mart bookshelves that we built some homemade reinforcements onto because they would have fallen apart long ago otherwise).

Now those three are running out of room so I got another large one a year or so ago.

Hopefully this will last another two years, by which time we’ll hopefully finally be moving someplace much bigger.

I’ll finally conclude this by showing you a few quick retro oddities. 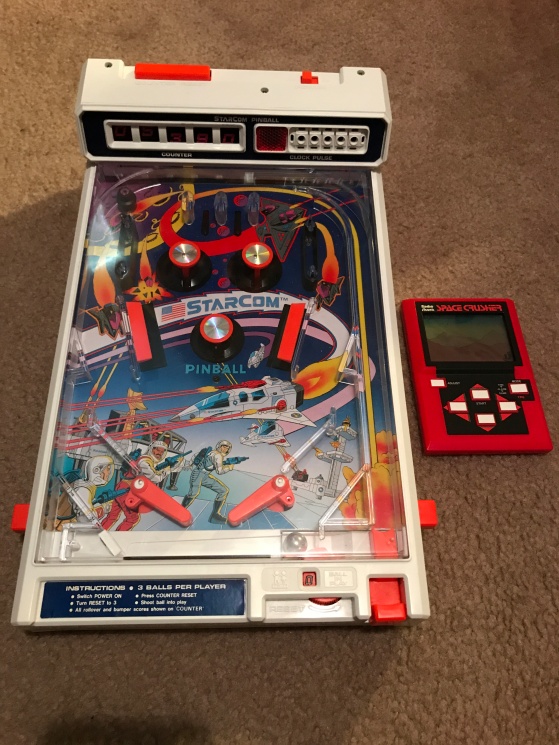 That is a genuine StarCom mini-pinball machine from the 80’s. Amazingly it’s in brand new condition and still works perfectly, though it’s unbelievably noisy (which is apparently normal for these old mini-pinball devices). I tend not to use it too often because of the noise, hassle of inserting and removing the batteries every time, and fear of breaking it because they seem semi-fragile. At least it sure is nice to look at though (at least it is to an 80’s-obsessed fellow like myself).

Next to it is an old Radio Shack Space Crusher LCD game. Another one that I managed to find in new and working condition. I remember this being my favorite portable game as a child until some jerk stole it and I kind of always wanted to play it again so I looked around and found it because that’s the kind of thing I can do now as an adult man-child. Honestly, if I had more room and money I’d build an entire room full of 80’s junk like this. I’d even get one of those 80’s robot butlers in there. Someday I’ll make that dream come true…

Anyway, that brings this tour to a conclusion. Thank you for indulging me. Maybe I’ll do a sequel in five years when we have a house and I’ve built that ridiculous 80’s room of my dreams!