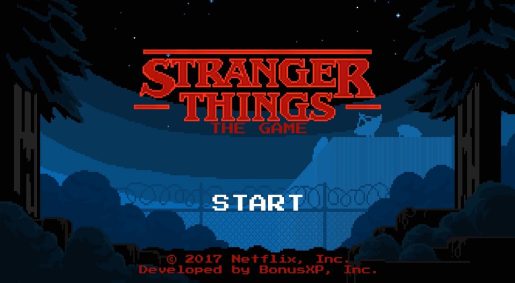 A free game? No, this can’t possibly be good, can it? Surely it must be packed full of microtransactions or constant advertisements. No? What is this? What’s going on here? How can this be? Yes, this is a retro-themed Stranger Things game for phones, and it’s completely no-strings-attached free, AND it’s actually fun! Crazy, eh? It’s basically just a simplified Zelda knockoff, but it’s a surprisingly decent one.

There’s a surprisingly large world to explore here, with a lot of overworld locations to explore, and a generous pile of dungeons to fight and puzzle your way through. Instead of the usual collecting of special items that you need to beat certain bosses and get through certain obstacles, here you’ll collect eight different characters that each have their own special abilities that will perform those functions. You may need the ranged attack of Lucas’ slingshot to solve certain puzzles or Dustin’s ability to…throw pudding cups to lure enemies? Sure, why not.

The combat is probably the weakest point, being so simplistic and touchscreen reliant, but it’s still decent enough, and there are some interesting boss battles. There are also a bunch of standard Zelda-style fetch quests and hidden items to find so you can increase your hearts and damage and such.

Basically it’s a fun game that lasts around six hours, and it’s completely free with no annoying registration forms, in-game sales, or any downside at all really. So what are you waiting for?

Stranger Things: The Game is available now for free on iOS and Android!