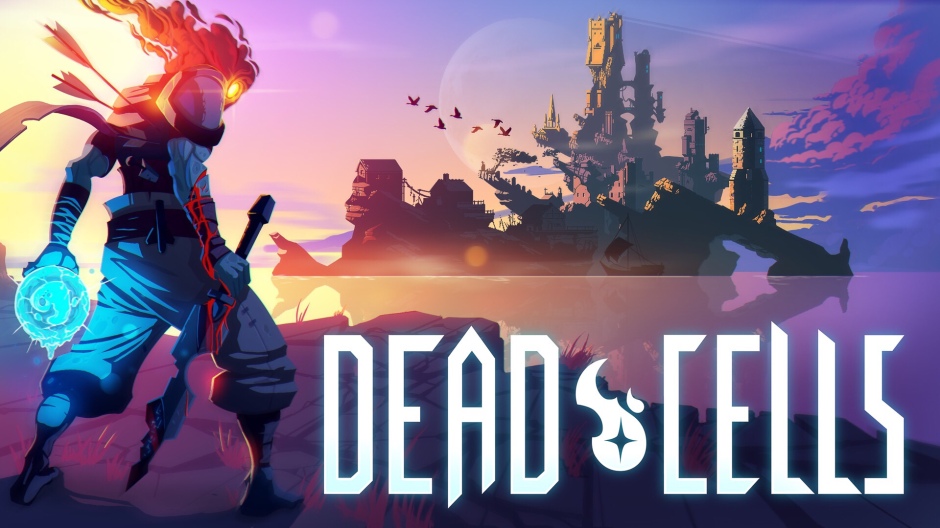 This review is part of Metroidvania Month.

Dead Cells is hard, let’s get that out of the way first. You will die and die again, and each death puts you back to the very beginning of the game. I have uttered many, many choice swear words while playing Dead Cells.

But the important thing is that every one of those deaths felt fair – I knew what I’d done wrong and vowed to do something different on my next run. And most important of all, Dead Cells is a hell of a lot of fun. 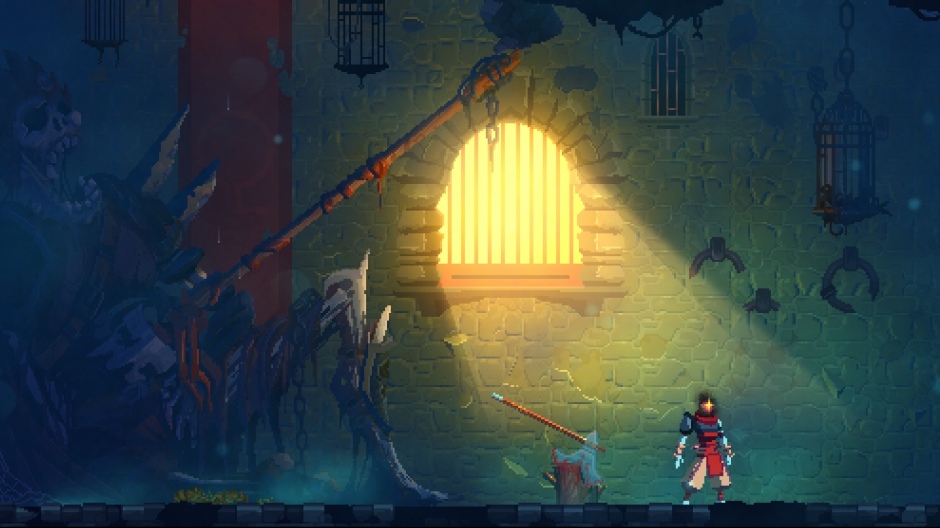 The game starts with a squelchy green bundle of matter dropping from a pipe and then crawling towards a headless corpse, which it then reanimates. This is your avatar, and you find yourself in a prison on an island where something has gone very wrong indeed, with clues in the environment hinting there has been some sort of disease outbreak. And now the island is infested with monsters.

At the start, you have a rusty old sword and space for a secondary weapon – you’re given the option of picking up a bow or a shield. You can also equip two skills or grenades, if you can find them – these include things like ice grenades or traps you can lay down to damage monsters and stop them chasing after you. Monsters drop gold when they die, and most levels have a shop where you can buy better weapons – but you can also find them hidden in chests and tucked away in secret rooms. 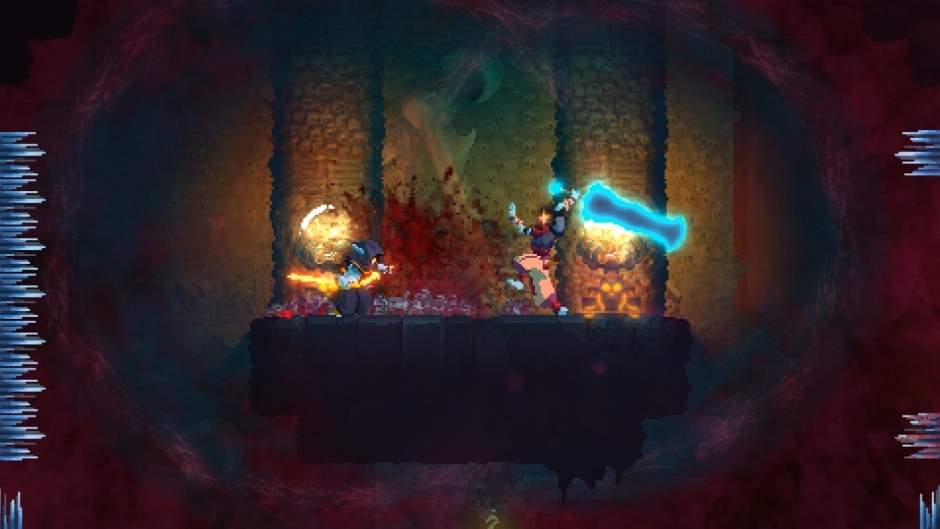 The thing is though, you’re always torn between exploring and simply surviving. If you can get through a level, your health is topped back up to full and you can choose a helpful mutation for the next one, like a bigger health bar or more powerful combos. But each level also has various power scrolls scattered around, which boost your attack and health – for the maximum chance of survival, you need all of these, but do you risk fighting through the hordes of monsters to get them? And that’s the game in a nutshell – a perfect balance between risk and reward.

There have been loads of occasions where I’ve been low on health but just wanted to push on a bit further to uncover some better weapons – sometimes it pays off, but if it doesn’t and you die, you’re sent right back to the beginning of the game. Sometimes you’ll meet an elite enemy that’s tough to kill but leaves behind tons of goodies – is it worth the risk of fighting, or so you press on? And sometimes you’ll come across a cursed chest with amazing treasure – but if you open it, you’ll have to kill ten enemies without taking a hit to lift the curse. These are always tough decisions because the dire penalty is restarting all over again.

But the good thing is that even though you’re constantly being sent back to the beginning of the game, you do gain a sense of progression. Some enemies drop the titular Dead Cells, which can be converted into upgrades at the end of each level. These are essential items such as a health flask that lets you top up your HP mid-level, or an option to unlock a random starter weapon from the selection you’ve found throughout the game. You can also find blueprints for new weapons, and there are loads to unlock. The room at the start of the game has dozens of glass vials that populate with upgrades and weapons as you unlock them – and the sheer number of these vials shows just how much there is to discover.

The weapons themselves are key to the game’s success. There’s a big variety, from electric whips to flamethrower turrets, and all of them are fun to use. They also come with modifiers, if you’re lucky – for example, you might find a sword that sets your victims on fire, or a bow that causes bleeding. One time I found an awesome electric whip that set enemies on fire and then caused lethal flesh-eating worms to erupt from their corpse. And there’s an element of strategy in combining the weapons – for instance, once I found a sword that did an extra 100% damage to frozen enemies. Combined with a freeze grenade, it was devastating. 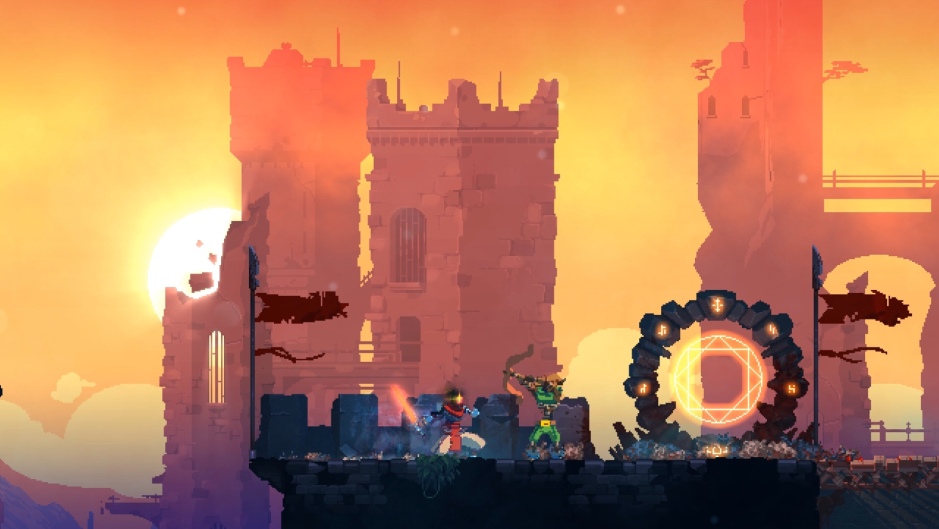 But the thing is, you never know what weapons you’re going to get on any given playthrough, so there’s a strong emphasis on adaptability and improvisation. I mostly ignored the shield at first, but then I got given a broadsword to start with, and I found they paired together very nicely – the shield meant I could defend against attacks and give myself time to wield the cumbersome but powerful sword. The random weapon selection encourages you to try every type and combination, experimenting to learn their strengths. There are no dud weapons as such – every one is useful in some way.

The levels themselves also encourage adaptability. Each one is procedurally generated, so you never quite know what’s around the corner. This helps to keep things fresh over multiple playthroughs – sometimes you’ll bump into an elite baddie you’ve never seen before, for example. And the levels themselves look utterly gorgeous – very Castlevania-esque pixel-art locations suffused with current-gen lighting and animation. Half the fun of the game is finally making it to a new level and basking in the beauty of it all.

The Metroid influence comes in the form of permanent runes that you obtain by beating certain boss characters. These give you abilities that can be used to access new areas, often allowing you to access a second exit on that takes you to a completely different level. Your playthrough can take any number of routes through the 11 different levels according to which runes you’ve obtained, which really helps to keep the game fresh.

And this feeling of choice extends to the way you approach the game. You might opt to be slow and methodical, searching out every last upgrade before moving to the next level. Or you might try to rush through to open the timed gates, which hide oodles of goodies but close after a set time in each playthrough. These gates offer a way to dodge your way through the first level should you get bored of playing it again and again, yet still find some decent weapons.

And speaking of dodging, the control system is glorious. Combat is fluid and fast but never chaotic – you always feel like you’re the master of the mayhem that unfolds. Your sword swings have a decent crunch to them, and the roll move that lets you avoid attacks is positively balletic. I love that the designers made it so that touching an enemy doesn’t inflict damage – your health only goes down if you’re hit by one of their attacks, which are helpfully proceeded by an exclamation mark above their head. It encourages you to get right into the thick of a fight, pirouetting out of the way just before you take a hit.

And the more you play, the better you get, picking up the skills needed to get past even the toughest enemies. For example, the dual-sword-wielding Runners on the second level killed me time and time again until I gradually worked out a way to beat them – first by trapping them and pounding them with a bow, and later by partying them with a shield and slashing at them with a sword while they were dazed. Enemies that seem impossible at first eventually become walkovers once you get your strategy worked out. And building up those skills is immensely satisfying.

In short, Dead Cells is just an absolute joy to play. The one caveat is the difficulty I mentioned right at the start – if you shudder at the idea of dying regularly and restarting again and again, then this might not be for you. But if you don’t mind a challenge, Dead Cells will keep you coming back for ‘just one more go’ long after you probably should have gone to bed.

Dead Cells is available for Switch, Xbox One, PlayStation 4, PC and Mac. We reviewed the PS4 version.

Disclosure statement: Review code for Dead Cells was provided by Evolve PR. A Most Agreeable Pastime operates as an independent site, and all opinions expressed are those of the author.