Command and Conquer: Red Alert 3 (2008) – There was a time in the late 90’s that I wasn’t sure if Westwood and Electronic Arts knew how ridiculous the Command and Conquer series was.  Sure, Red Alert was almost the whacky spoof version of vanilla Command and Conquer, but even then there was something about it that felt that everyone was in on the joke but the developers themselves.  The 2000’s increased the broodiness, introduced a first person shooter, and then in 2007 Command and Conquer 3 shut the door on its brief dalliance with clever self aware humour.  And so the joke was on us.

Which is why the box art for Command and Conquer: Red Alert 3 is so great.  One look at this magnificent piece of art and there are no ifs buts or maybes, this game is one enormous bloody piss-take.  If the Armoured bears and the ridiculously cliched Russian femme fatale on the cover aren’t enough to convince you that, hey Red Alert is one big f**k off joke, wait until you start producing  weaponised bottle-nosed dolphins.  The fact that it so perfectly captures that Soviet propaganda art of the cold war period is just icing on the cake really.  I love it. 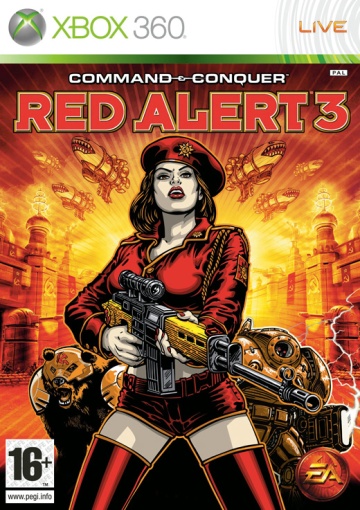