Darksiders II (2012) – On 1 April 2013 I called Darksiders II ” …the best video game of the generation.” Perhaps I was a being more than little hasty when i wrote that but there’s just something about the look of Darksiders II that gets me excited – giddy even – whenever I see the game either in motion or in still image.  I’m surprised too, because hulking great big characters reminiscent of the Todd McFarlanes and yours “too numerous to name video game artists hailing from the United States” normally aren’t my shtick, instead I prefer a more highfalutin art style that favours elegance and beauty over ugliness and grit.  But Darksiders II manages to get me over that hurdle by filling its characters with such personality and individuality that the fact that they look like they’ve all been pumping iron and on the ‘roids while waiting for the apocalypse didn’t trigger my gag reflex.  The world too is a bleak world full of chaos and decay, almost all of which looks like it could collapse into a hellfire filled chasm at any point.  Even when it is beautiful it feels as if that beauty is a front for something more sinister.

And sitting right at front and centre amongst all of this great design are the stars of the show, the aptly named Death and his horse Despair, who also feature prominently and ominously on the box.  A short glimpse and it seems almost like a Rorschach test, a symmetrical inkblot for you to interpret, and give an insight your mind

But look closer and it’s a more ominous sign, as Death and Despair stare you right in the eyes, inviting you to join them on a journey to the Well of Souls.

I suggest you accept. 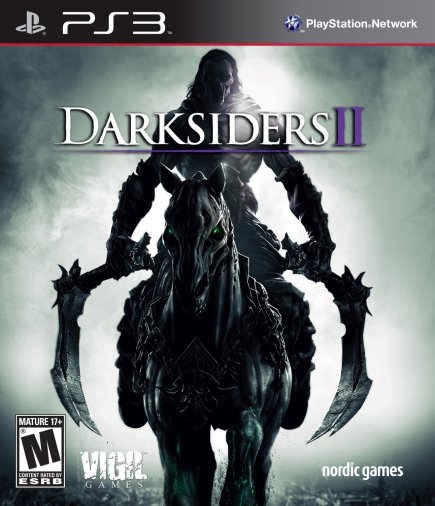