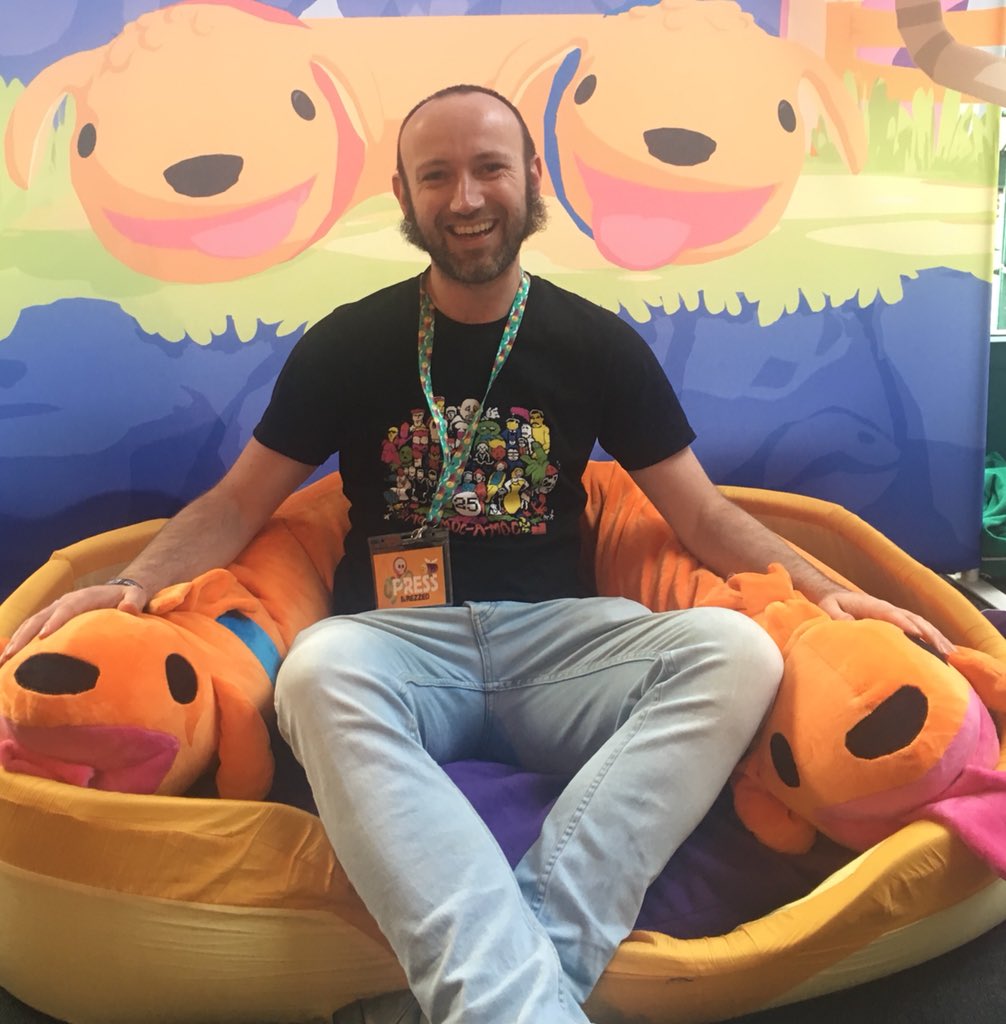 The prize for best chair at Rezzed definitely goes to Phogs.

I’m back from three chaotic and wonderful days at EGX Rezzed, and oh, I have so much to tell you. So many wonders! First of all, I wanted to share the games that really stood out for me, with the important caveat that I was only able to play a tiny fraction of the games on show. Even after three solid days, I could only scratch the surface of what was there.

I’ll be doing in-depth looks at State of Mind, Steel Rats, Disco Elysium, Another Sight and Travis Strikes Again: No More Heroes later in the week, hence why they’re not listed below despite all being very promising. Anyway, onwards! I’d never heard of Dead Cells before arriving at Rezzed, but it ended up being my favourite game there – to the point where I went back to play it more than once. It’s a sort of 2D pixel-art metroidvania crossed with Rogue elements – so the aim is to explore the huge levels and find scrolls and weapons that will power up your character, but if you die you end up being sent back to the start. The idea of having your progress reset sounds intimidating, but the game is so much fun to play that I just couldn’t wait to plunge into the levels again and again.

I spoke to the developers Motion Twin, and they said one of the elements they were keen to include was that walking into enemies doesn’t cause damage – you only get hurt if you’re attacked. This translates to really fun fights where you’re not afraid to get up close and personal with the bad guys, rolling out of the way at the last second before they attack. Dead Cells is out on Steam Early Access now, and it’s heading to Xbox One, PS4 and Switch later this year.

What a joy this was to play. Produced by Rob Hewson and team, Hyper Sentinel is a reimagining of Uridium, the C64 shoot ’em up published by Hewson Consultants, which was run by Rob’s dad. As in Uridium, the game is focused on destroying all of the gun emplacements on a huge starship battlecruiser, after which you’ll face a boss. Hyper Sentinel also borrows elements from Defender, and the power ups are particularly satisfying, including a giant twin-beam laser that wipes out everything in its path. Rob says they’re aiming to release simultaneously on Steam, PS4, Xbox One and Switch on 11th May. The Switch version is the best of the lot – the frantic gameplay is perfectly suited to handheld mode.

This game was an absolute riot with four players. It’s essentially robot basketball, and you control a tiny alien thing that manipulates the controls of the robot from the inside. One button activates rocket boosters, for example, and another extends the robot’s legs. But it’s all delightfully imprecise, and trying to coordinate the hulking robot leads to constant hilarity, especially with two or more of you trying to work the same machine. Imagine a slow-motion ballet of the absurd.

Regular Human Basketball is available at itch.io for whatever price you want to pay – even free. But a new, updated version is apparently heading to Steam in the very near future.

This survival RPG bears a strong resemblance to Don’t Starve, but with a much stronger focus on story. You play a mother on a search for her child, a quest that sees you gradually learning how to craft a variety of objects that will help you traverse a dark fantasy world.

I found Smoke and Sacrifice utterly compelling, to the point where I didn’t want to put down the controller, and I love the art style. Definitely one to watch. The game is headed to PC, PS4, Xbox One and Switch later this year. The point and click adventure is alive and well in Germany, it seems – studios over there are churning them out, and the publisher of Unforeseen Incidents assured me that the country sees healthy sales of the genre. And a good thing, too, as I love a good point and click – and Unforeseen Incidents looks particularly special. For a start, the art of the game is captivating. This comic-book-style world is filled with lovely little details, and the character models in particular are endearing. The plot also sounds interesting – here’s the blurb from the official site:

“When small-town handyman Harper Pendrell meets a dying woman in the street, he unwittingly stumbles into a diabolical conspiracy – a mystery only he can solve. An unknown disease is spreading across the country, and between them a scientist, a reporter and a reclusive artist hold the key to stopping it.”

The game is scheduled for release on PC on 24th May.

Hipster Cafe Simulator made me laugh more than any other game at Rezzed – as a piece of satire, it’s perfect. It was created by a couple of developers who used Loading Bar in Dalston, London, as their coworking space – and Loading have also helped them to promote it, even though essentially the game is taking the piss out of bars and cafes just like the one it was created in.

The game is basically The Sims, but in a cafe – and to attract more hipsters to your cafe, you need to make it more and more hipsterish. My favourite detail is that there’s a tech tree to unlock music for your cafe that starts with a free Spotify playlist and then goes back in time through CDs, cassettes, eight-tracks and vinyl, before ending in an organ grinder and monkey. Apparently the monkey attacks the patrons, too – the ultimate in hipster cool. There’s a tech tree for coffee as well, with the coffees becoming more and more elaborate and ludicrous as you go on.

You can create food to serve at the cafe, and whatever you create is automatically given a hipster name. I made a ‘Non-mainstream deconstructed burger’ that was essentially a beef patty on a plate. Genius. There’s no release date for this yet other than ‘2018’ (it’s only been in development for three months), but you can wishlist it on Steam.

Phogs! What an amazing game this turned out to be. The editor of Eurogamer recommended I should check it out, and he was spot on – it really is fantastic.

The puzzles are simple but ingenious – my favourite was discovering that one head could clamp hold of a water spigot, causing the water to flow through the dog’s body, effectively making it a doggy hose, thus enabling you to water some plants on the other side of the screen. Each level is nice and compact, too, so there’s no time to get bored. Solve a couple of fun puzzles then whoosh, you’re onto the next stage and there are all new things to get your head(s) around. A real cracker. Phogs is currently set for release across ‘multiple platforms’ in 2019. 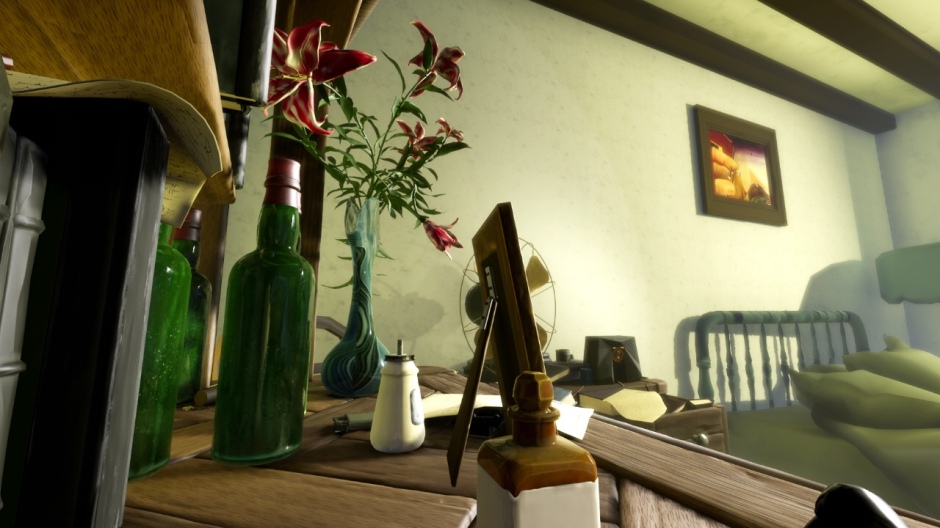 This one came out of nowhere and was an unexpected delight. I can’t think of many 3D games that show life from a bug’s point of view – Deadly Creatures on Wii is about the only one that springs to mind* – and there’s something strange and unnerving about seeing an ordinary room from an extraordinary perspective.

Metamorphosis is loosely based on Franz Kafka’s novel of the same name, so you play the unfortunate Gregor, who has mysteriously been turned into a beetle. Meanwhile, the plot of another famous Kafka novel, The Trial, plays out in the room around you, as Joseph is arrested for an unnamed crime, much to his confusion. I asked the developers about how they plan to dramatise these Kafka stories, as essentially the tales lack a traditional narrative arc and are almost nihilistic. In response, they showed me a sneak preview of some of the later levels, and it seems it all gets much more metaphorical and much less realistic later on – can’t wait to see the finished game.

Metamorphosis is from the Polish studio Ovid Works, and it’s in the very early stages at the moment – no confirmation of a release window or platforms yet, but you can follow their dev blog for more.

Bushy Tail is a beautiful storybook-style game about a three-legged fox that certainly is definitely worth keeping an eye on, although unfortunately I didn’t get to play it at Rezzed – what I saw looked intriguing though.

Double Kick Heroes is a rhythm-action game that combines heavy metal, guns, zombies and Cadillacs, so plenty to like there.

Everspaceis already out on PC, but I played the PS4 version and it’s very lovely indeed, and well worth a look if you’re into space shooters – I particularly liked the way each of your ‘lives’ is actually a different one of your clones.

This Dead Winter also stars a fox – the dev lamented that there were no fox games when he started making it three years ago, and now about half a dozen games starring furry forest creatures are coming out. The game sees a fox cub being kidnapped by evil spirits, causing the fox dad to head out to face said spirits and some weird old robots. It looks stunning, which is all the more impressive considering it’s the work of basically one guy.

Finally, Nippon Marathon is a four player race/Japanese game show, and it’s as ridiculous as that concept suggests.