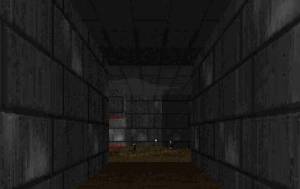 You find yourself within a strangely repetitive corridor. The walls are covered in a sort of grey brick pattern that seems to be made up of identical blocks that have been repeated across the entire wall. The floor and ceiling have a grainy, stretched quality, as if they’re not quite in proper 3D.

To your left you can see a stainless steel barrel full to the brim with a noxious green substance – the evil liquid is bubbling steadily and looks like it could very well explode if you come into contact with it. You steer well clear.

To your right you see what appears to be an enormous gun hovering a few inches off the floor. The silver grey weapon has an enormous muzzle and an elaborate shoulder support – clearly it has immense power, no doubt more than a mere civilian like yourself could hope to handle. You peer closer to make out the writing on the side: it reads “BFG9000”.

“Curious… I wonder whether it stands for Big Friendly Giant?” you think.

Suddenly,  you hear a gurgling, terrifying, animal-like noise that sounds as if all the demons of hell have risen up and are ready to burst through into the dimension of the living. There’s no way to tell where the sound is coming from – it feels as though it’s coming from all around you.

Panicked, you look around for a means of escape. One door has a soft, welcoming light emanating from what looks like The Drawing Room. Straining your ears, you can just about make out the sound of polite, gentlemanly conversation, although it is quickly drowned out by the rising sound of the denizens of hell. The door at the other end of the corridor leads to the safety of The Entrance Hall. Something else catches your eye too – there’s a slight irregularity on the wall to your left, and something tells you that if you were to rub up along the wall while repeatedly pressing ‘X’, you might just uncover a secret…