Some would say Core Design’s Jaguar XJ220 is just a poor-man’s Lotus Turbo Esprit Challenge.    Racing games were a different beast in the 90’s, not blessed with the processing power to be able to do real world physics or three dimensions, they had to make do with black magic trickery to make their games tick.  Although Magnetic Fields was first cab of the Amiga 500 rank with their immensely popular Lotus series,  Core Design closely followed and what better way to outrun the competition with what was at the time the fastest production car on the road.  And so Jaguar XJ220 was born.

Right off the bat there’s no denying that Jaguar doesn’t have the polish that its main competitor did.  While it seemed to have a similar sense of speed it never felt quite as smooth as Lotus did and as a result felt low-rent in comparison.  Similarly Jaguar doesn’t look as pretty on the road with trackside detail not quite as picturesque, the car models that look slightly out of proportion and the track design and locations are less inspired than those in Lotus.  Of course none of that mattered when you were cruising around the world at a top speed of 354 km/h because on the track Jaguar played well well enough to forgive any shortcomings.  Racing the exotic super car through traffic felt as it should and there was a certain satisfaction that came from driving one of the fastest vehicles on Earth.  But it was impossible to not consider Jaguar in light of its rival’s achievements and by that standard it was always going to come second best.  Far from a cheap knock off Jaguar XJ220 was a worthy competitor to the Lotus series’ crown.  But it would never usurp its main rival to claim first place.  Always the bridesmaid, never the bride. 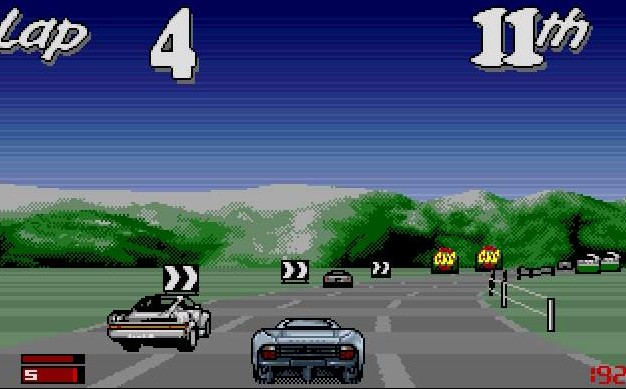 Have a favourite game from 1993?  Tell us in the comments below.  Don’t forget to come back soon for the next game in our countdown.  Miss a year?  Catch up below.