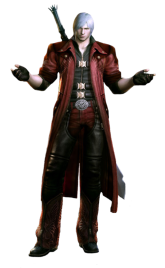 When i was a young university-aged adult i wanted desperately to be a cool dad when i grew up.  By age 18 I’d met ‘the one’, which in my slightly over-studied and hormone fuelled mind, meant that I was on an accelerated path to parenthood.   In the heady days that were the early 2000’s I was listening to Punk rock and Pantera, wearing studded belts and shorts down to my knees and socks up to just thereabouts.  And it was at this height of youth that I had grandiose visions of being a 20-something father in that image, the cool dad that listened to cool music and wore cool clothes, the kind of dad my theoretical kids would think was so cool they’d never be embarrassed to bring their friends home.  Of course none of that panned out, as I grew up and grew out of that phase, largely leaving all of it behind, much to the delight of my parents and now fiancee.  Time is a wonderful thing.

Around that same time, Capcom’s classic was on the minds of that same uni student, and the Devil May Cry series was the king of my own Playstation 2 mountain. The combination of stylish combat, amazing art design, and what was a technical marvel at the time, had me playing and replaying each entry in the series over and over again.  Every game was the same, I’d slog my way through to the end credits, and then turn around and started all over again.

But I think what sealed the deal for me was the character of Dante himself, who was by far the coolest video game character around, and full of the kind of attitude that would appeal to any red-blooded teenage bloke hell bent of venting that testosterone from their veins.

And people were bloody angry when Capcom went and redesigned Dante.

He was still the same bloke, the same gun-toting sword wielding Nephilim Son of Sparda demon hunter and all that, just looked a little bit different to the guy we used to know.  Gone were the silky smooth white locks, gone was the epitome of Japanese character design circa 2001, and gone was the overly-buckled leather chest-baring ensemble.  In was a younger more modern and dare I say more masculine version of demon hunter that ditched the ornate look and feel of old Dante, and replaced it with a more casual and functional design.

It wasn’t the biggest overhaul, it wasn’t the biggest reboot, and it wasn’t a far sight away from the original design.  But the internet wanted none of it.  They wanted the status quo.  They loved old Dante.  And hey, sure, like the rest of the internet I still have a soft spot for that sassy white-haired trench coat wearing Dante that wowed me so many years ago.  But you’d have to be blind as a platypus in water not to see that watching him run around slaying demons, what with his ‘look’ and all, was becoming a little bit like watching an old hair metal star prance about wearing mascara and a leather jacket.  And if Capcom didn’t change him, he’d be a relic of a bygone age, an embarrassing reminder of what was once cool.  Part of what made Devil May Cry so great back when it was first released was how edgy it was, but 15 years later in an age where most kids utter the “c-word” by age 10 and are sexting by age 16, Dante’s particular brand of sarcastic shenanigans was practically tame.  And tame isn’t what the game that changed so much, and inspired so many, was ever based on.

And that needed to start with Dante.  He needed to get with the times and Capcom needed to get him there – kicking and screaming if need be.  Time goes by, and with it, what’s cool inevitably goes with it.  Much like the odd stalwart Pantera fan you sometimes see on the street, still sporting ripped up jeans and flannelette shirt and toting a bottle of Jim Beam, it was time someone pulled him aside and told him to move on.  Because I bet if he has kids at home they don’t think he’s as cool as he thinks he is.