Back in April I had an amazing time playing the Steel Rats demo at EGX Rezzed, grinning like a loon all the way through my playthrough. Your bike has a chainsaw for a front tyre! You can drive up vertical walls! It was ridiculous and wonderful, and I couldn’t wait for the release date to roll around.

But I did worry at the time that chewing through baddie after baddie with your wheelsaw might get a little repetitive after a while – and so, sadly, does it prove. Steel Rats has a ton of brilliant ideas, the wheelsaw among them, but after you’ve played through just a few levels, you’ve pretty much seen them all. 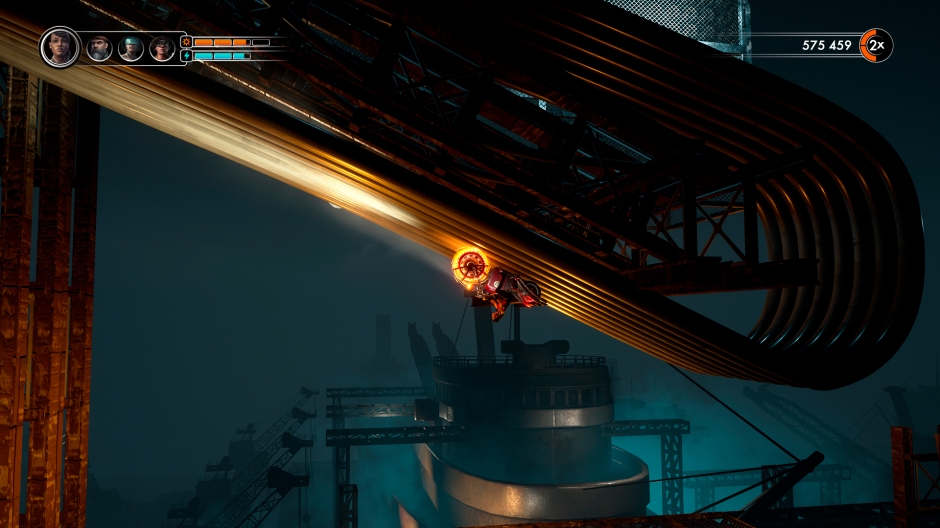 Still, let’s start with the good stuff. This game looks utterly gorgeous for one thing – the future-retro 1950s look is brilliant, and the levels are highly polished and deeply gorgeous. I noted the occasional frame-rate drop on PS4, but nothing that really detracted from the experience, and overall this is one super-duper-looking game. The plot is also pretty fun – a mysterious entity has been animating a junkpile on the outskirts of the retro-futuristic Coastal City, and a biker gang, the Steel Rats, sets out to tear through the army of junkbots that’s terrorising the town.

The gang is made up of four characters, each with slightly differing abilities, and you can switch between them on the fly. James, the leader, has lots of health, while Lisa the racer has a high top speed – you get the idea. But if one of them runs out of health, they’re unavailable for the rest of the level, so essentially you have four ‘lives’. If all of the characters die, you have to start the level again from the beginning. 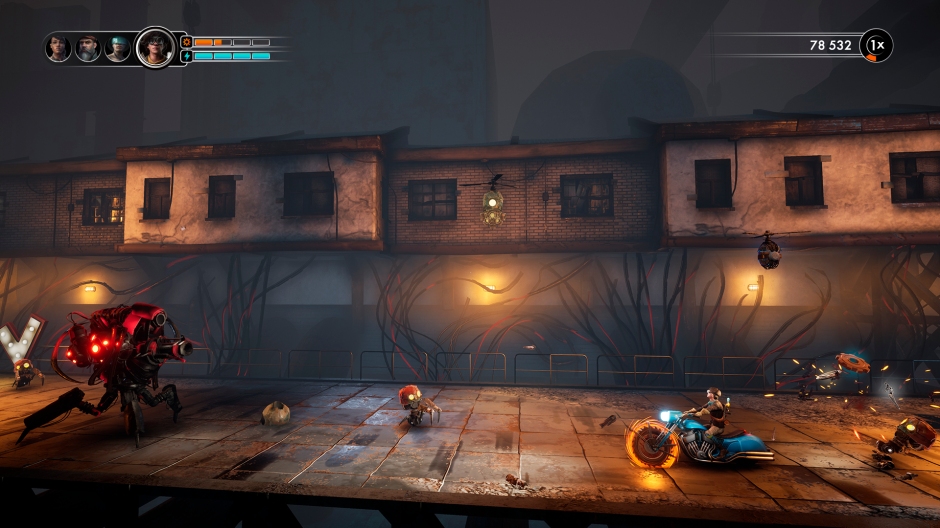 The real joy of Steel Rats is the thrill of flinging your motorbike around, smashing through robots and leaping off tall buildings – basically it’s a high-octane side-scroller on a souped-up hog. The bikes handle beautifully, with tap of the circle button causing you to gracefully twist your bike around in the opposite direction, and a squeeze of the R2 trigger propelling your steed forward at alarming speed. I can’t think of another game quite like this one, but Sonic the Hedgehog is probably the closest in feel. You can barrel through many of the levels at top speed, crashing through enemies with your wheelsaw and using it to climb vertical walls and even drive along ceilings. And just like the Sonic games, it becomes increasingly hard to navigate at top speed: clipping an obstacle brings your glorious run to an embarrassing halt.

So yes, Steel Rats is a lot of fun, and pretty damn unique – I challenge you to name another side-scrolling motorbike platformer/brawler. But it also has a bevy of flaws that conspire to take the shine off your enjoyment. For a start, although the bike handles wonderfully, the control layout is cumbersome to say the least. R2 is the throttle, and you’ll basically have that held down for almost the entirety of each level. X, meanwhile, activates the wheelsaw, which also provides a speed boost, so you’ll mostly be holding that down as well. But then jump is on the triangle button, which is a bit of a stretch when you’re also holding down X and R2 – and if you want to perform a big leap, then you’ll be needing to hold both of those buttons down to get a good run up. I fluffed many a jump by thwacking the square button as I was stretching for triangle. 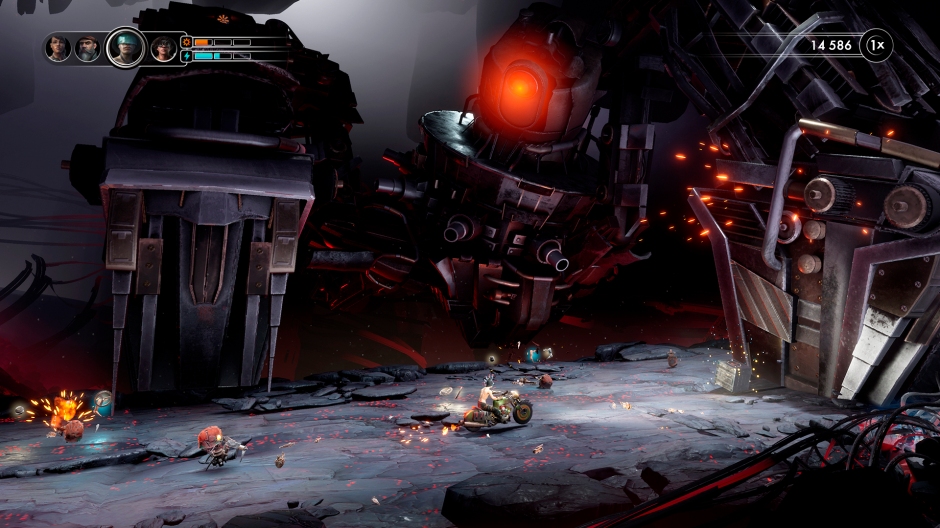 And weirdly, the charge button for your special attack is on R1 – you have to hold this button, then release it and hold the accelerator to do a dash attack. But you’ll be wanting to hold the R2 button down to accelerate anyway – there’s no point stopping dead in the middle of a fight – so basically you end up holding down R1, R2 and X (for the wheelsaw) all at the same time. It’s bonkers. What’s even weirder though is that there’s no option to change the control set up. It would make much more sense, for example, to swap the rarely used brake button to R1 and have charge on L2, but alas the controls are set in stone. Hopefully this will be fixed with a later patch.

Special moves are also annoyingly hit and miss in terms of whether they execute. You do a dash by double tapping the X button, and this is almost essential for making big jumps, but it’s pretty tricky to pull off, and I fell to my death countless times when I couldn’t get it to work. Likewise, your ultimate attack is done by double tapping circle and holding it down, but I only managed to get this to work about 50% of the time. These moves would have been much better off having a dedicated button of their own. 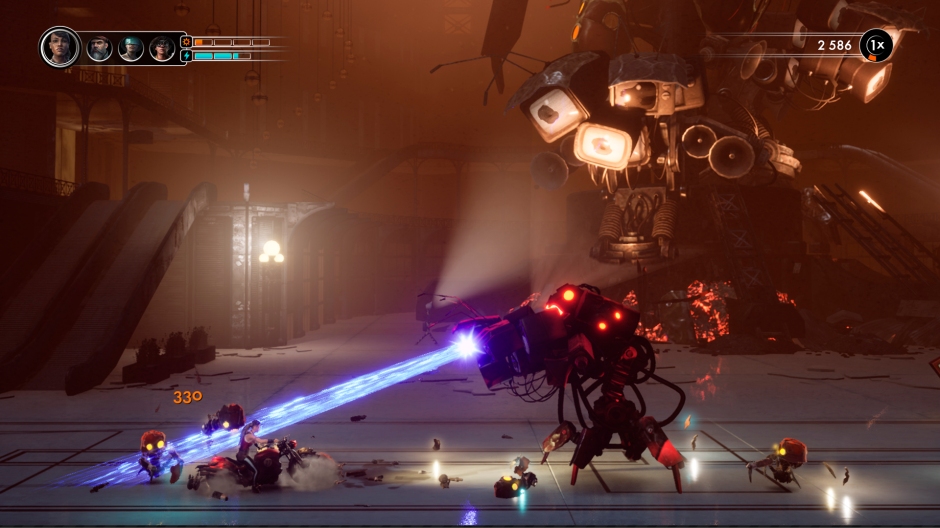 So the control scheme is a bit irritating, but the real let down is the repetition. You’ll be seeing the same enemies all the way through the game, with only a few variations on ‘big chunky robot with three legs’. And all of them are basically defeated the same way – by ramming them with your wheelsaw and mashing your special attack button, which uses up a chunk of energy from the blue bar at the top of the screen. Each character has a different special attack, but you use all of them the same way, i.e. get close and whack the button. Lisa has flame jets, James has a hammer attack and Toshi has a drone that’s useful for taking out aerial enemies, while Randall has a harpoon that is, frankly, useless. Couple this with the fact that he’s only got a tiny health bar, and you’ll understand why Randall rarely made an appearance in my playthrough.

The game is relentlessly linear, a journey across five islands, each with between four and seven levels. Some levels have alternative routes through them, and each one has a secret hidden away somewhere that reveals a bit of lore, but generally it’s a left-to-right slog. Occasionally a level will throw up something different, like when the Killdozer, a giant robot that follows you throughout the game, relentlessly pursues you upwards through a giant mine shaft. Or when you have to chase a flying robot along a ruined freeway to retrieve some stolen some uranium rods. These levels were some of the best bits of the game, but also the worst – any error in either of them causes you to be sent back to the start, which provoked some very animal howls of frustration on my part. I was haunted by memories of the hoverbike level in Battletoads. Brrr. 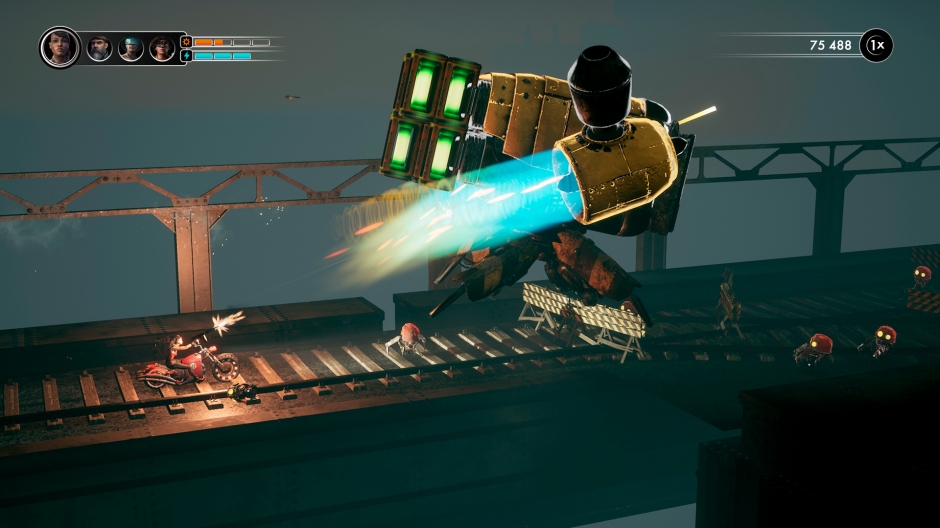 Don’t get me wrong, these chases were genuinely good fun – it’s just that they could have been so much better if they’d had some reasonable checkpoints. And it’s the same story throughout, really – great ideas that are often poorly implemented. For example, the economy is basically broken. Completing each level unlocks a set trio of upgrades for you to purchase with the junk you harvest from destroyed robots. And completing level-specific challenges provides bonus junk. But the thing is, even just charging through each level without really bothering to take on all the enemies still nets you more than enough junk to buy every upgrade as it’s unlocked – and by the end I had a massive surplus of junk with nothing left to spend it on, which means the challenges are essentially pointless. Why not tie the upgrades to the challenges instead? Or hide the upgrades within the level to provide an incentive to replay them?

And speaking of upgrades, these are also a little underwhelming. It would have been nice, for example, to unlock alternative weapons for each character, or to have a skill tree that lets you choose how to upgrade them, but instead you’re stuck with set upgrades that, for the most part, just make the weapons you already have a bit more powerful. And speaking of the characters, they’re not really different enough to warrant swapping in and out as you play. Lisa’s slight edge in terms of speed made her quite useful during chase sequences, but otherwise I didn’t feel much need to swap between the gang members.

It’s all over fairly quickly, too. I completed the entire game over two nights, with only a few secrets to find and a few of the specific level challenges to go back and complete – but seeing as doing these challenges will only add more junk to add to my already enormous stockpile, I don’t feel the need to go back and finish them. 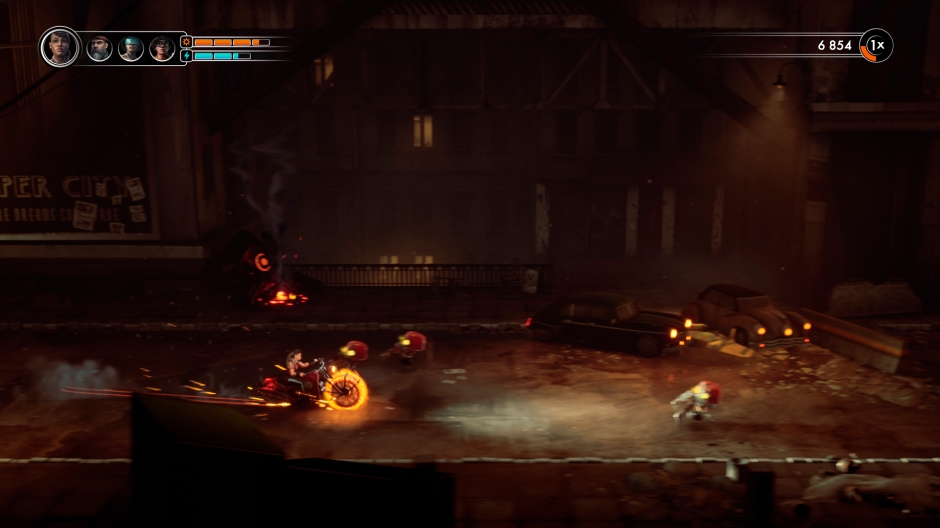 All the way through, I couldn’t help thinking what a missed opportunity this game is. It has brilliant fundamentals, with a really fun driving mechanic and excellently OTT touches like driving along ceilings. I wanted it to fully embrace that ridiculousness and turn all the dials up to 11 – to do a Bayonetta, in other words. As it is, it peaks early on and then coasts to the finish line. I was willing Steel Rats to up the ante at every turn, and I kept thinking of ways it could do it. Why not have a robot the size of a skyscraper that you have to drive up? Or a sky battle in which you leap from airship to airship? (There is one airship level, but it’s disappointingly brief.)

And while we’re on the subject, why make the game so relentlessly linear? It would have suited a Metroidvania format really well, with you driving around the city and unlocking abilities and upgrades that let you push further on. The differences between the characters could have been made much more pronounced, too: perhaps each could have an ability that you need to progress past certain obstacles. And the limited-ammo guns you can pick up on some levels are actually more fun to use than your so-called ‘special’ abilities – why not focus the combat around those instead? Maybe one character could have a sword for close-range combat, and another could have a long-range rifle that’s better suited to different enemies. And slo-mo! Maybe you could activate slo-mo when you drive past an enemy, with a second or two to lock-on to weak points with your weapon. It would have made a change from just charging into them at every opportunity.

As it is, Steel Rats is… well, it’s just OK. Not bad, but a long way short of brilliant. Yet with a few tweaks to the formula, a sequel could truly be something special.

Steel Rats is available for PS4, Xbox One and PC. We reviewed the PS4 version.

Disclosure statement: Review code for Steel Rats was provided by Swipe Right. A Most Agreeable Pastime operates as an independent site, and all opinions expressed are those of the author.