The Witch and the Hundred Knight was released in the dying days of the PS3, and although I never played it, the game stuck in my memory thanks to its odd name and over-the-top gameplay. The reveal trailer showed the titular Hundred Knight smacking around dozens of enemies at a time, the screen a riot of rising numbers, status changes and god knows what else – glorious chaos, in other words. It looked fun.

And now here we are with The Witch and the Hundred Knight 2, which I can confirm IS fun – if also massively flawed. I can also confirm that there’s no need to have played the original before you dive in – the mechanics have barely changed for the latest instalment, but plot-wise, the first game seems to have absolutely no connection with this sequel apart from featuring witches and the Hundred Knight. And even the knight itself might not be the same one from the previous game. Having said that, I haven’t completed it yet, so there’s a chance there might be some end-game revelations – I’m currently about 26 hours in and I’ve explored around two-thirds of the map. Considering that the gameplay has varied very little over the past 26 hours, I don’t think there will be anything in the final third that will significantly change my opinion of how the game plays. 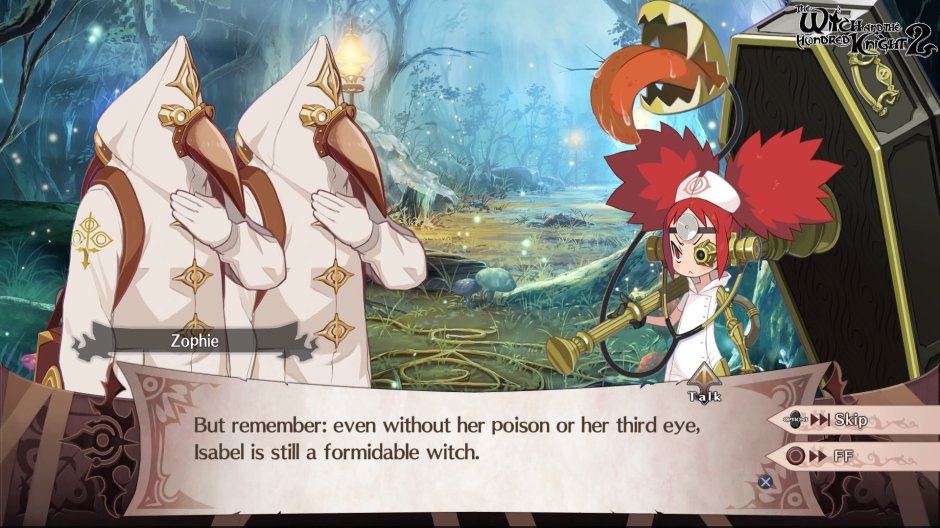 That might sound like a criticism, but it isn’t. In a nutshell, The Witch and The Hundred Knight 2 is about beating up hundreds and hundreds of nasty creatures in the hope that they drop rare weapons and armour, then equipping and upgrading those weapons and armour, then going back out and fighting even nastier creatures in the hope that they drop even rarer weapons and armour. It’s hardly original, but it’s still a compelling loop – and I must admit I love it. Yes, roving through the woods while swinging a sword at everything in sight is repetitive, even mindless, but I also found it quite soothing. It’s a great game to just unwind with at the end of a long day, a game that lets you switch off your brain and smack buttons. If you like the Dynasty Warriors series, you’ll know what I mean. 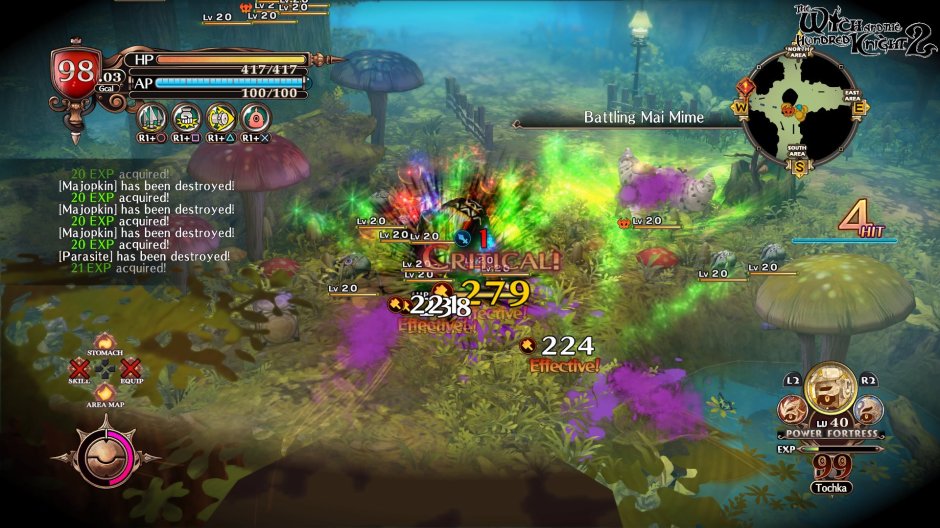 The plot opens with a girl called Milm, who is being treated for ‘witch disease’. This malevolent syndrome affects young girls, causing them to grow a third eye on their forehead. Once the eye opens, these girls become pure evil and gain extraordinary magical powers. A group known as the WR is trying to stop the spread of witch disease by taking down fully fledged witches and cutting out the unopened third eye of ‘latent witches’ – but as they try to operate on Milm, her third eye opens and she becomes the witch Chelka. At the same time, Milm’s doll is transformed into the Hundred Knight – a powerful ‘manania’ (a sort of witch’s puppet) that you take control of for the rest of the game.

The story sees Milm’s sister Amalie trying to find a cure for Milm’s witch disease, as well as trying to hide Milm/Chelka from the WR, which is trying to take her down. And as the game progresses, the story goes to some very dark places indeed. Don’t be fooled by the cute anime styling, it won’t prepare you for when the plot explores vivisection, rape and infanticide. There are also some overtly sexualised characters and outrageous boobage that might make players squirm uncomfortably – I’m thinking of Lisa the sexy bum-drill nurse in particular. And what’s going on with Chelka’s costume? She’s meant to be about 9 years old, but she seems to be wearing a zig-zag bikini and micro skirt.

Whether you view all this as charmingly quirky or simply distasteful will give you an idea of how much you’ll enjoy this game. For the most part I quite enjoyed the weirdness of it all – but there were a few cringe-worthy moments, mostly involving Lisa, that had me praying no one else would walk into the room and ask what the hell I was playing. 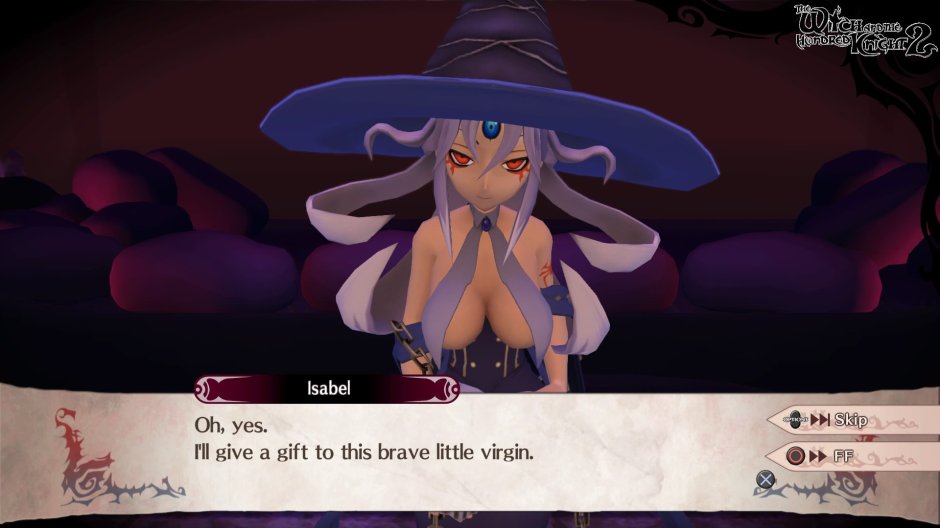 The cut scenes are fully voiced but play out like a visual novel, with very little animation – something I didn’t mind, but that might put some people off if you’re used to fancy CGI interludes. (Having said that, the awkward English voice acting started to grate after a while, but thankfully there’s the option to switch to the much better Japanese voice artists.) The limited animation, along with the pretty but frequently reused level backgrounds and the endlessly recycled enemy templates, indicate that this is very much a mid-tier game – and perhaps something of a rarity as games increasingly become polarised between indie experiments and multi-million dollar AAA blowouts. Mid-tier, or AA, games like this were ten-a-penny on the PS2, but you rarely see them these days. Which is a pity, as I have a bit of a soft spot for them – I’m the guy who loved Dark Void, after all. (Note, however, that The Witch and the Hundred Knight 2 launched as a full-price $49.99 game back in March, rather than at a mid-tier price point; yet already it’s seen some deep discounts, so you can easily scoop it up for much less than that.)

In terms of the actual gameplay, you’re given a destination on the world map and then its up to you to hack and slash through corridors of enemies until you reach the marker – at which point there’s almost always a boss for you to fight. The bosses act as skill/level checks – if you’re not sufficiently powerful, you’ll have a tough time and might have to go back and grind a bit to level up before you face them again. Or more likely, you’ll have to spend a considerable amount of time in the atelier room (alchemist lab), boiling down your unwanted or less powerful weapons and armour to improve your best bits of kit. In fact, you’ll spend a huge amount of the game in this room, carefully crafting the best gear. In essence, this is a game about making numbers go up – which might sound boring to you, but which I just can’t get enough of. There’s a real satisfaction to be had in creating the perfect combination of ultra-powerful weapons.

Crafting is enormously important because you’ll need at least 15 decent weapons on hand at all times. This is because you need to switch between three ‘facets’, or different versions of Hundred Knight, each with different stats and skills – one is focused on magic, for example, so you’ll need to use that facet if you’re fighting foes that are weak to magic. Each facet has five slots for weapons, with each weapon filling a different position on your basic five-hit combo. What this basically means is that you’ll be spending a long time levelling up and swapping around weapons for these slots to keep them in tip-top shape as the difficulty increases. I really enjoy this kind of nitty-gritty inventory fiddling, but I can also see that such intense admin will put off a lot of players. 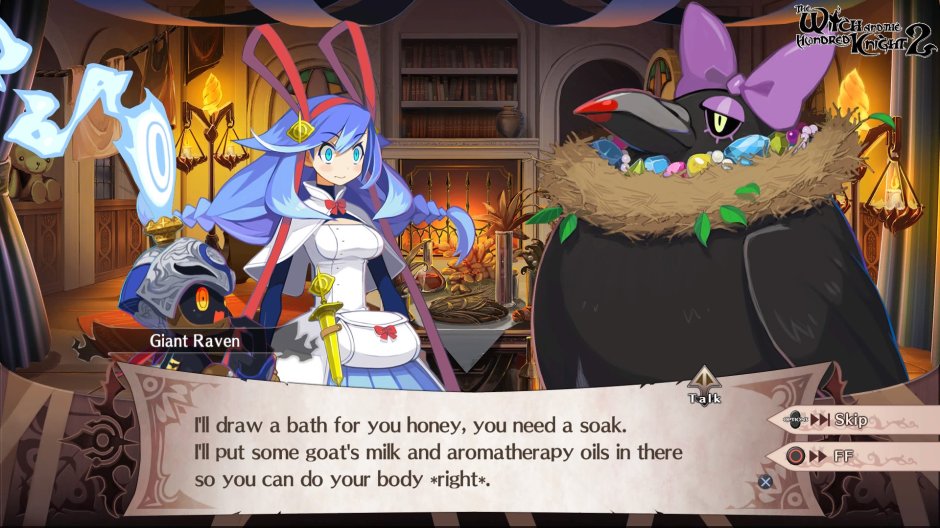 Going back to the bosses, these are generally the game’s pain points – some are infuriating to fight, requiring numerous retries, and many are frankly uninspired. One in particular, Matra, is simply an annoyingly overpowered version of a regular baddie, and confronting her was the closest I came to simply giving up on the whole shebang. More infuriation comes from the GigaCalories system – this meter ticks down as you fight, and when it reaches zero you’re in trouble. If you end up wandering too far from a save point and die with no GigaCalories left, all of the items you’ve collected on that run will be lost. This led to actual howls of frustration on my part, as I watched legendarily rare items go up in smoke during some ill-judged and overstretched bout of exploration. Having said that, it does provide a nice risk/reward mechanic – and you can top up your GigaCalories with well-timed combos, so it rewards technical play.

Overall, I’ve really enjoyed The Witch and the Hundred Knight 2, mostly because I love tinkering in menus and ploughing through fields of enemies with a big hammer. But I can also see that this game will only appeal to a very small niche of players – the repetitiveness, excessive admin and divisive weirdness of it all will no doubt put most gamers off. Still, if you’re a fan of Japanese kookiness and relentless button mashing, you might find something to like here.

The Witch and the Hundred Knight 2 is exclusive to PS4.

Disclosure statement: Review code for The Witch and the Hundred Knight 2 was provided by Koch Media. A Most Agreeable Pastime operates as an independent site, and all opinions expressed are those of the author.