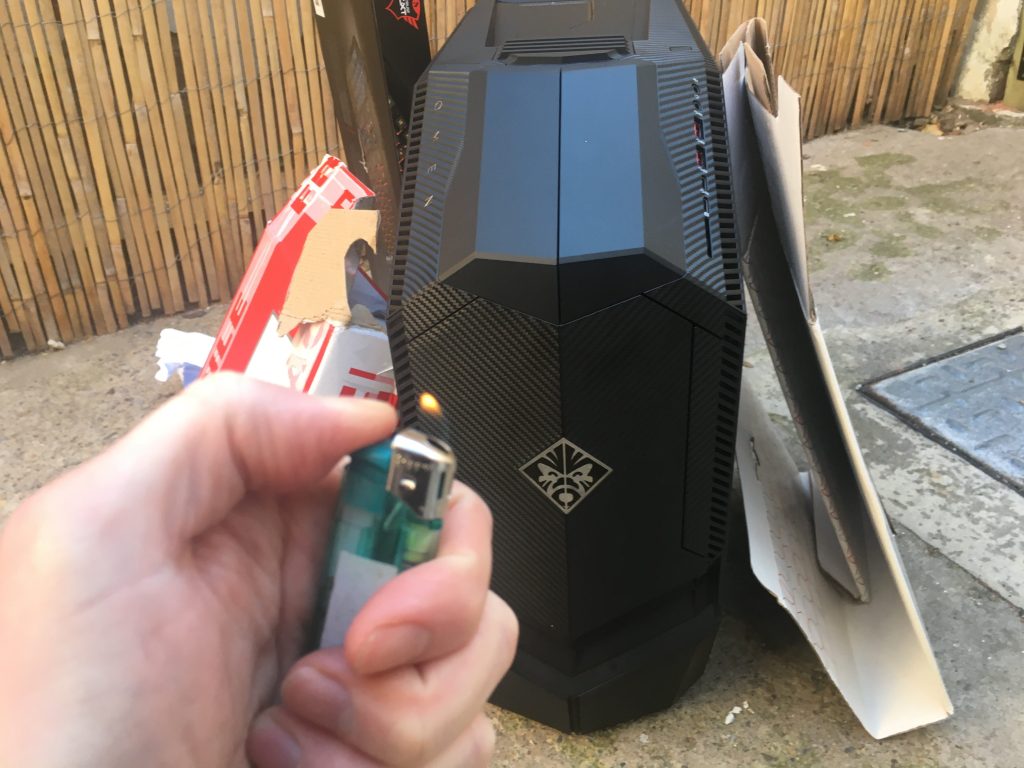 I got a new PC this week. And now I want to set it on fire and laugh while it burns. Here’s why.

Last week I got sent a PC game to review, but it just wouldn’t run. I’ve been doing more and more PC game reviews of late, and generally these games have worked fine on my decent-ish laptop. But not this one. It spluttered into life, crawled along for a while, and then finally gave up the ghost and died.

“Right then, time to bite the bullet,” I thought. “I’m going to have to splash some cash and get a ‘proper’ gaming PC. My actual job depends on it. At least I can claim back the tax.”

Cue some frantic internet searches and plenty of head scratching as I tried my best to understand what the hell all these numbers next to graphics cards actually mean. Eventually I stumbled across a helpful graph that put it all into plain English (“This one can do VR.” “This one does 4K”, etc.). But then I almost had a brain aneurysm when I saw how much all this stuff costs. Bloody hell, PCs are expensive.

I know I could probably save some money by building a PC myself, but (a) I didn’t have the time, as I needed to review the game right away, and (b) I don’t have the foggiest idea of how to do it. So after trawling through tech websites for hours and wincing at the prices, I eventually found a modestly powerful but reasonably priced prebuilt HP Omen desktop for £650. Intel i5 processor, 8GB RAM, Nvidia GX 1060 graphics card – it won’t set the world alight, but it will do for now.

I reasoned I could always upgrade the components over time – and then I got all excited about which ones I could get. I finally realised why people like building PCs – it’s a game. There are levels, collectibles and rewards, not to mention puzzle solving as you try to slot all the components together and make them work. I found myself getting excited about the arrival of my new gaming PC and making a mental list of all the fancy bits and bobs I’d buy for it down the line. Hey, PC gaming is fun!

Oh, the follies of youth. I now look back on these precious few days before the damn thing actually arrived as what I call my ‘PC gaming honeymoon period’. 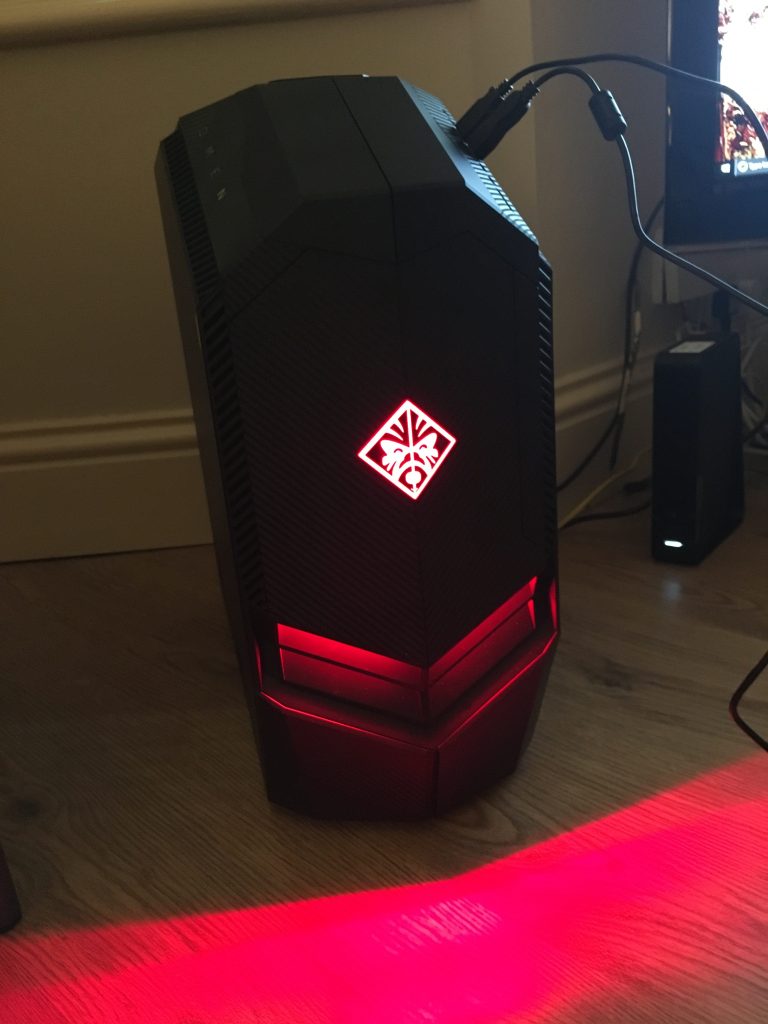 The disappointment started when I got it out of the box. This thing is HELLA ugly. It looks like a wonky tank that Batman might own, topped off with malevolent red lights. And yes, I know I chose to buy this model, but after thoroughly researching all of the PC cases available, I have concluded that every single PC case you can buy is utterly hideous. They seem to mostly be going for the teenage-boy market, all neon lights and sharp angles, like something out of The Fast and The Furious. I’ve half a mind to plonk a doily and vase of flowers on top of my overly aggro PC just to humiliate it.

Then there was the second problem – it didn’t come with a keyboard. Now you’re probably thinking that I’m incredibly naive to imagine that my new PC would come with a device that would actually allow me to use it, but I kind of assumed that a keyboard is a given. Stupid, huh? Luckily I had a spare mouse – but with no keyboard my new PC was just sat there, useless, until I had a chance to get down the shops.

I took a trip into town the next day, but the only keyboards the gaming shop had were those ones with the glowy backlights. What is the obsession with neon and gaming PCs? I plumped for a rainbow-coloured one in the end, on the grounds that it was the least threatening.

Back home, I plugged the PC into my telly with the new HDMI cable I’d bought. (Oh yeah, I forgot to mention it didn’t come with an HDMI cable either. Of course it didn’t.) I switched everything on… and my TV remained stubbornly blank. An hour later, after trying every HDMI cable I had in every possible input on the TV, I ended up frantically searching Google to work out why something as simple as plugging in a cable in was so frustratingly difficult. As it turns out, a forum entry told me, the main HDMI port on prebuilt PCs is disabled, and you have to use the HDMI port next to the graphics card instead. BECAUSE OF COURSE YOU DO. Sure enough, right down the back of the PC, hidden beneath a metal overhang, I discovered the ‘real’ HDMI port.

They don’t make this easy, do they?

I finally fired up my HP Omen and spent the next 15 minutes telling Microsoft that no, I don’t want to share my data with them, as Windows posed the same question in half a dozen different ways. “If you want your ads to be more relevant to you, you could share all your data with us, yeah?” No thanks, I’m good. “But what about voice recognition, that would work better if you let us spy on you, right?” No Microsoft, for the last bloody time, what the hell is wrong with you? “OK, but crash reports, crash reports right, we can look at those, yeah?” Hnnnnnnnngh.

Finally, with Windows up and running, I spent the best part of an hour downloading antivirus software, Steam, and all those other boring but essential programs you need to actually make your PC work properly. And then I spent half an hour trying to work out why the task bar was cut off on my TV, finally discovering that apparently TV manufacturers don’t like you to see the whole screen at one time, and that you have to select the special ‘Screen Fit’ picture option to actually, you know, see everything on the screen. Eventually, I booted up the game that I’d gone through all this rigmarole to play.

And it worked fine!

And then it crashed.

And then Windows crashed.

And then nothing would work at all, not even the Windows Start button, despite multiple reboots.

This is the point where I first had thoughts of simply tipping a can of petrol over my new purchase, chucking a match, and cackling as it melted into nothing. But I resisted and went to bed instead, glowering with resentment.

I spent the entire morning investigating and trying to solve the mystery of the recalcitrant Omen. After much deduction, I reasoned that it might be down to Windows updates. I worked out how to boot the PC in safe mode so that I could actually click on Start without the PC freezing, and began the long process of updating. It took the ENTIRE DAY. I had to restart my PC SIX TIMES.

And then, on the evening of the third day, it worked. It finally goddamn worked. I booted up the game again, and spent a few hours playing. And it was… OK. I fiddled around with the graphics settings a little, but none of them seemed to make any appreciable difference. Maybe it’s just because my PC is underpowered, but I couldn’t really see any difference from what my PS4 could do. And yet this thing has just cost me twice as much as my PS4 and taken three days of my life.

Not only that, it is impossible to actually play comfily using a mouse and keyboard while sitting on a sofa. I defy you to tell me a way. Sure, I could set up my PC at a desk, but that would mean buying a monitor, and I’ve already blown more than half a grand on this hideous thing. It’s sat there right now, all black and ugly, a chunky tower of disappointment. The last time I remember spending so much money and getting so little joy in return was when I renewed my car insurance.

Just give me one reason why I shouldn’t set it on fire right now. Just one reason.