It’s September, which means that publishers are getting ready to unleash their biggest games ahead of the busiest sales period of the year. But who will be the winners and losers in the fight to become Christmas number one?

Here’s a list of some of the biggest upcoming games in 2018 (via Gamespot):

EA has recently pushed back the release of Battlefield V from October to November – a sensible move considering that it was sandwiched between Call of Duty and Red Dead Redemption 2. But word on the street is that preorders of Battlefield V are down on expectations – so another benefit of pushing back the release is that it will give EA time to drum up more interest in the game.

There are a few things we can take for granted in the run up to Christmas. The latest FIFA game will sell like hot cakes (in the UK at least), and dominate the top of the charts for the next few months. Whereas once there were multiple football games vying for gamers’ attention, those days are long gone and are unlikely to make a comeback – even if Pro Evo continues to put up a spirited fight. Even then, the gap between FIFA and Konami’s franchise seems to be widening, with the latest Pro Evo selling 42% fewer physical copies than its predecessor.

Likewise, the latest Call of Duty will sell by the bucketload. This series has dominated the Christmas charts for the last decade, and that shows no signs of stopping. Infinite Warfare may have underwhelmed punters a couple of years back, but that seems to have been a blip rather than a downturn in the series’ fortunes if the sales of Call of Duty: WW2 last year are anything to go by. Still, it will be interesting to see whether the lack of a traditional single-player campaign this time around will affect sales.

And of course, there’s the annual Assassin’s Creed game – this year it’s the turn of Greece after last year’s well-received Egyptian instalment. Again, it’ll sell by the boatload, but probably won’t dislodge CoD and FIFA from the top of the charts. Forza Horizon 4 represents the annual Forza episode this year, and will also no doubt do very well, although as a console exclusive its sales will be limited.

So far, so samey. But the big difference this year is Red Dead Redemption 2, a rare tentpole release from Rockstar. The hype for this game is through the roof, and it could easily outsell the usual big hitters. That said, it’s unlikely to replicate the phenomenal success of GTAV, which still regularly tops the charts years after its release. Then again, will ANY game ever be as successful as that one?

There’s also Fallout 76, which is an interesting one. It’s been mostly well received and looks set to be a success, but I wonder whether the switch to an MMO style game will lose fans or attract more players. Certainly from my point of view, it doesn’t appeal as much because of this – but then again the ongoing nature of the game might keep players coming back for longer, and might make Bethesda more money in the long run. But it launches just a couple of weeks after Red Dead Redemption 2, so I’ve a feeling that game will eat into Fallout 76’s sales – especially if players are put off by the MMO aspects.

Spider-Man will undoubtably be a big hit based on the brand alone, although the positive reviews help. But the big question is, will it outsell God Of War, Sony’s other big 2018 exclusive? Unlike God of War, it’s going up against some strong competition, and there isn’t a current Marvel film in cinemas to increase interest and boost sales. Shadow of the Tomb Raider, meanwhile, will no doubt sell well for Square Enix, but I’ve a feeling it won’t shift as many copies as the previous entry – there doesn’t seem to be much hype around it.

Then there’s Soul Caliber VI – I’ve a strong feeling that this will sell well initially but then disappear out of the charts quite quickly. It looks good, but it may well get smothered in the end of year sales rush. Likewise for Hitman 2 and Darksiders 3 – it strikes me that they would do much better if released at a quieter time of year, rather than competing with Call of Duty and Red Dead Redemption 2.

Nintendo have three big releases: Super Mario Party, Pokémon Let’s Go Pikachu/Let’s Go Eevee and Super Smash Bros. Ultimate. The latter will no doubt sell massively, eclipsing the sales of the Wii U entry thanks to massive hype and extreme levels of fan wish fulfilment. But the Pokemon game’s are a bit of conundrum – will the entry-level nature of the game’s put veteran players off or attract a huge new audience off the back of Pokemon Go? I’m betting on the latter, but it will be interesting to see whether they match the sales of the 3DS mainline entries. And Super Mario Party will no doubt sell more than previous entries thanks to its suitability to the Switch and local multiplayer, but it’s still very much a mid-tier Nintendo franchise, so it’s unlikely to get anywhere near the sales of Ninty’s other two big hitters.

What else? Well, pity poor Wreckfest. The PC version reviewed remarkably well a few months back, but the console port is being sent out to die in between a bunch of big releases. As I said recently, arcade driving games like this seemed to have died a death in the charts as open-world games took their place, and I fully expect this one to flop badly, even though it’s a very good game. Time will tell.

And then there are the wildcards. Judging by the stupendous success of the Crash Bandicoot Trilogy, which has barely left the top ten for the best part of a year, Spyro Reignited Trilogy could be Christmas 2018’s unexpected runaway hit. A few people have some reservations about the new art style, but nostalgia clearly sells, so I expect this game will do phenomenally well.

Starlink, on the other hand, seems like a risky prospect. The toys-to-life market seems to be very much on the wane, with Disney Infinity and Lego Dimensions already giving up the ghost, so is there still an audience for a game about buying toy spaceships? It reminds me of the failed relaunch of Guitar Hero and Rock Band a couple of years back, which showed that people had clearly got tired of toy instruments. It doesn’t help that previews of the game have been a bit muted. I have a feeling that this one may very well crash and burn.

Mega Man 11 could be a big hit, on the other hand – relatively speaking, of course. There seems to be a lot of excitement about the new game, not least from AMAP’s own Map Schwartzberg, and previews have been positive. Artifact could prove to be a bit of a phenomenon, too – Valve’s first new game in ages is sort of Hearthstone crossed with DOTA, and will no doubt sell by the bucketload for years to come. 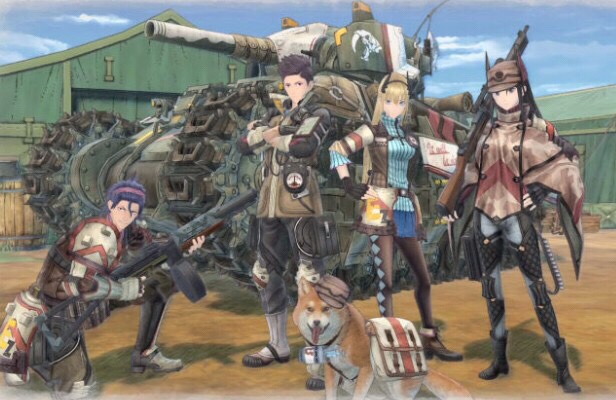 As for me, the games I’m most excited about are Valkyria Chronicles 4 and Just Cause 4. The first Valkyria Chronicles is one of the best games I’ve ever played, but the sequels were either PSP exclusives or never made it out of Japan, while the action-based Valkyria Revolution from last year was a major disappointment. But number four is going back to the series’ strategy roots, so I’m very excited for this one. And I had an absolute blast playing Avalanche’s Mad Max game the other month after it was given away on PS Plus, so I’m really looking forward to their latest Just Cause game. I missed the last two instalments, but playing Mad Max has really got me hankering for some vehicle-based harpooning.

How about you? What games are you most looking forward to in the final months of 2018?